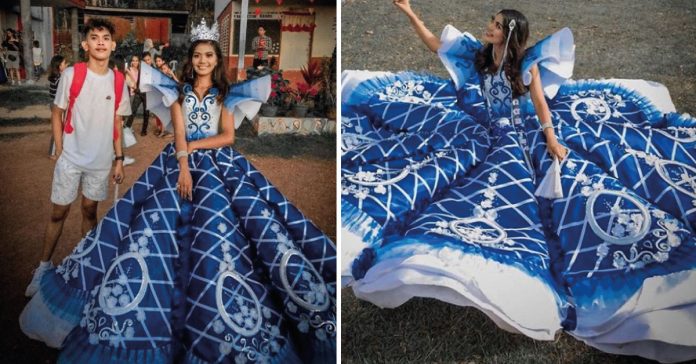 Without any knowledge in cutting and sewing but with a great taste for fashion, the young Maverick Francisco Oyao showed the infinite love he has for his younger sister. The situation at home was difficult, his parents were not in the best economic conditions.

The story of these two brothers moved the world of the internet because of their strong bond, the sacrifices and showed the great talent that Maverick has. It turns out that Lu Asey was in a predicament, the school dance was close to her and she had no dress.

Maverick Francisco Oyao and his family are from Zamboanga, Philippines but they do not have many resources, however, the young man wanted to support his sister and decided to make the gala dress.

As a good brother he had to think how he would do such a thing, he is a student of Culture and Arts at a local university, after asking his friends and acquaintances for help, he managed to get some money to buy the necessary materials and make the personalized design for Lu Asey.

Mave, as her close friends tell her, had no idea how to make a dress and never imagined acting like a fashion designer but she learned on her own and after a week and a half of hard work she finished the dress.

At the school gala they were going to name the best dressed of the night so Lu was especially excited to see if maybe she could win the prize, at the end of the evening, the young woman did not take first place but all the attendees loved her dress.

In addition, she was very happy and satisfied with everything her brother had done for her. Maverick uploaded much of her process to her social networks, where she received congratulations and good comments.

Here are some photos he shared, from the sketch to the final result, there’s even a short photo shoot.

He began his mission with only the little he knew…

Made the details of the dress by hand

It took more than 10 days to make it

He painted every detail so that everything was perfect

Thanks to her effort and love, her sister wore the dress of her dreams