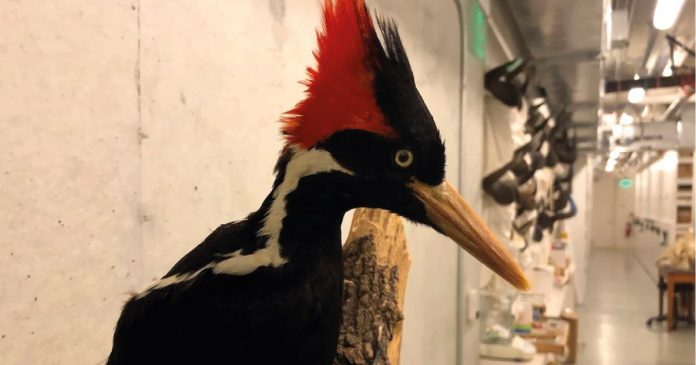 The Royal Woodpecker was declared extinct by the United States as well as 22 other species.

As a result of climate change that affects our planet we have the unfortunate consequence that it is an extension of some species.

This is the case of the Royal Woodpecker , where efforts to find it have already been exhausted, just like the rest of the 22 species.

Its presence could not be confirmed in the places where it was allegedly seen, which generated its tireless search in recent decades through the swamps of Arkansas, Louisiana, Mississippi and Florida.

This is why the United States government has already ended its search and it was declared extinct.

The Marshall clam was another species declared extinct, it is presumed that when they were identified and given a name they were already disappearing since they were never seen again.

Cornell University bird biologist John Fitzpatrick stated that “it was premature to declare the Royal Woodpecker extinct after investing millions of dollars in their search and habitat conservation.”

“Keeping it on the threatened species list keeps attention on it and keeps the state thinking about its habitat in case it still exists,” he said.

Around the world, approximately 902 species have become extinct, a figure that could be higher since some were not identified.

Many scientists affirm that both flora and fauna are disappearing more than ever before, which is very worrying, due to climate change.

The extinction of species is a critical factor both because of the decrease in natural wealth and because it is believed that humans have a duty or an obligation to preserve the natural environment.

Man, in his desire for industrialization, has been gradually destroying natural resources, creating destabilization in flora and fauna and generally destabilizing the planet.

We must worry about the extinction of species as this results in destabilization of the ecosystem, threats to other species that become endangered as well.

Don’t forget to share this information and leave us your comments on the extinction of the royal woodpecker.