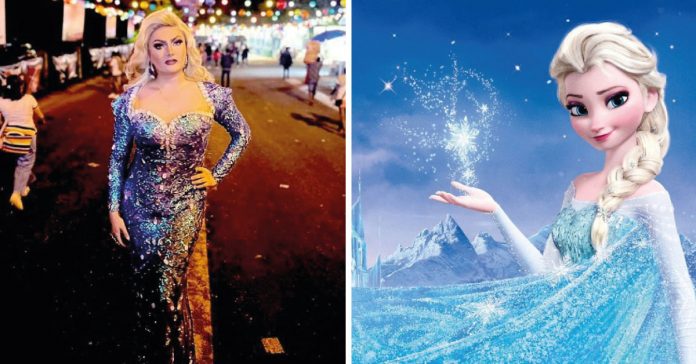 His outfit was so similar to that of the Disney character that the little ones did not miss the opportunity to get closer.

As children it is easy for us to believe that princesses exist, not only on a screen but also in the real world. And for 85 years, Disney has been determined to maintain precisely that idea, since its goal is that children do not stop believing in magic. In addition, the boundless innocence and imagination of the little ones contributes to making anyone in a huge and sparkling dress a princess.

This is exactly what happened to a drag queen as she was intercepted by several children who thought she was dressed as Elsa from the movie Frozen .

This character is one of Disney’s most iconic and also one of the most successful. In a short time it became a classic and it seems that there is no person in the world who does not know this ice queen and the history of her. Her almost white blonde hair and sparkly blue dress are unmistakable.

Therefore, if you see someone with these two characteristics, it does not matter that they are not exactly the same, it is inevitable that you will not find the resemblance. And a group of children, when they saw this, did not hesitate to approach this Elsa-like person to take a picture because the chances of meeting a princess on the street are not that high.

The event occurred in Mexico, during the Yucatan Xmatkuil Fair with the drag queen known as Mónica Bracamontes.

Drag queens are male individuals who dress, make-up, and act in exaggerated ways, appealing to traditional notions of identity and gender roles. Most are in the entertainment industry and many are dedicated to giving shows.

And this is just what Monica, played by Oscar Margalli , was about to do. The drag paid a visit to the fair, accompanied by her friend De ella Silvanashow to give her show. Before, they decided to take a walk around the campus without imagining that during their tour, a lot of children would come to take a picture with Monica. This because they believed that she was the protagonist of Frozen.

” When you go with your transvestite friend and the kids mistake her for Elsa ,” Silvanashow wrote in a Facebook post .

Monica was not indifferent and lived with the infants, maintaining the illusion that she was Elsa, at least at that moment. Both classmates laughed a lot at the situation because it was enough for a single child to ask for the photo for a line of other little ones excited to be next to the magical blonde to form.

Of course, the anecdote didn’t take long to go viral and many users applauded Monica’s action. They were also moved by the innocence of the children and in the comments they assured that they did not know discrimination and saw in Mónica a true queen.