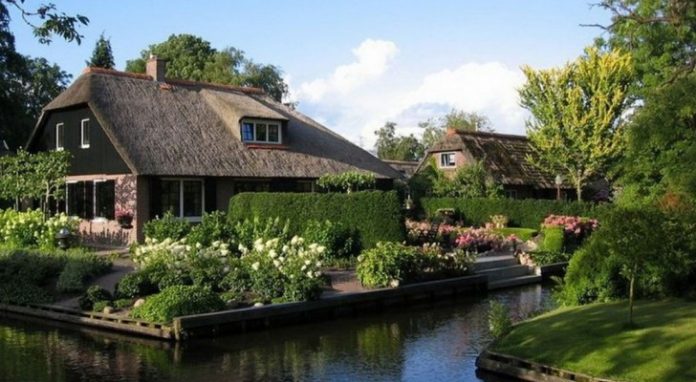 In the north of the Netherlands there is a small town which with its particularity is known as the “Venice of the North”, or “Green Venice”: perhaps the latter name is the most appropriate because Giethoorn , the name of this village, can be described as a vast expanse of green grass , crossed by dozens of intersecting canals in a dense texture.

In the eyes of visitors it appears as an idyllic place, thanks to the fact that no motor vehicle can circulate here. The only way to get around is to use a boat , and let yourself be rocked in all its most heavenly places.

It is a village of 2600 inhabitants, located on the Dutch territory of the Netherlands.

It was founded in 1230 by the Sect of the Flagellants, a Catholic movement of the Middle Ages: escaping persecution, they were looking for a place to hide, that’s why they built a country without roads to access it.

At the site, the fugitives found a large number of goat horns, which had died from a flood. Giethoorn literally means “goat horns”.

The typical boats of this small village have a flat bottom and are pushed on the surface of the water by a long pole.

Around Giethoorn there are many other towns worth a visit: Amsterdam is 120 km away.

The hustle and bustle of the city surprisingly stays outside of Giethoorn. There is only one cycle path, to be used as an alternative to gondolas.

All around beautiful houses with thatched roofs line the banks of the canals.

Nature is king in this Dutch oasis. The whole village is a continuous lawn; trees and flowers are reflected on the water of the canals.

To go from one bank to another, we take wooden bridges, there are more than 50 in the whole territory.

In the center, many museums have been opened, to know the history of this jewel.

Walking through the city center, one has the feeling of having been transported into an unreal world.

Every year the city takes place the Gondelvaart Festival, a suggestive competition between gondolas. For the occasion, the inhabitants decorate the boats with feathers and lanterns.