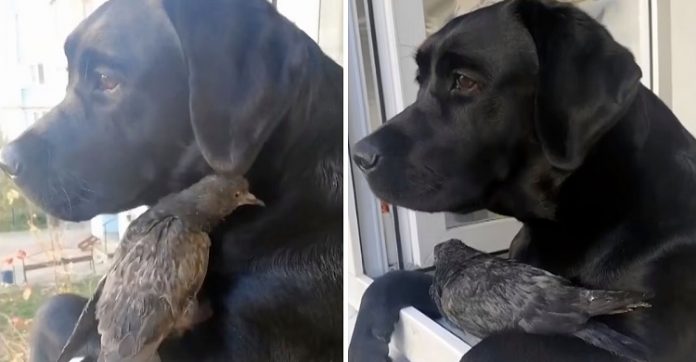 Although we think that the largest animals due to genetics will be aggressive with the weakest, it is not a rule, so we can often be wrong. Sometimes, pets can show a certain sensitivity, the same that they show every day when taking care of us and being with us in our home. In this case, we will talk about the relationship between a pigeon and a labrador retriever, something that happened by chance when the bird needed help .

All this happened in Russia, at the home of the lawyer Viktoriya Belostotskaya who was recording her dog Yunona while she was looking out the window as she usually does. Only at that moment something interesting happened, she saw that a bird had approached her dog From her. She at first was scared for the welfare of the pigeon . But he saw that Yunona was calm and that she did not show any intention of wanting to hurt him . When she checked on the bird, she could see that its feet were dirty and bruised. So she decided to help him, she cleaned it up and put it back on the window so it would be free.

The thing is that apparently he became fond of his dog, apparently he enjoyed the heat that the large body of the puppy gave off . Meanwhile, the puppy remained calm, continued to enjoy the scenery and was aware of all the pedestrians and vehicles passing by on the street. His owner titled the video: Why fly away from where you feel happy? . Something that made a lot of sense to many seeing the confidence that he developed in the dog . To tell the truth, the dog did not have any interaction with the bird, perhaps it was this calm that allowed him to feel at ease, between his paws and close to his body .

Users congratulated Yunona and her caretaker for taking care of the pigeon together, each in their own way showing great kindness to a living being that lives on the streets and was injured . Although unconsciously, the dog was not aggressive at all, perhaps he understood that the pigeon was alone and his company was positive. He deserves all the applause, he is very kind, from such a caretaker to such a dog, let’s hope the pigeon has recovered .

Below you can see the video of this little dog taking care of the pigeon and making it feel safe:

Share with your friends and family this adorable video of how animals care for themselves. So that more people see the empathy that animals have with others.