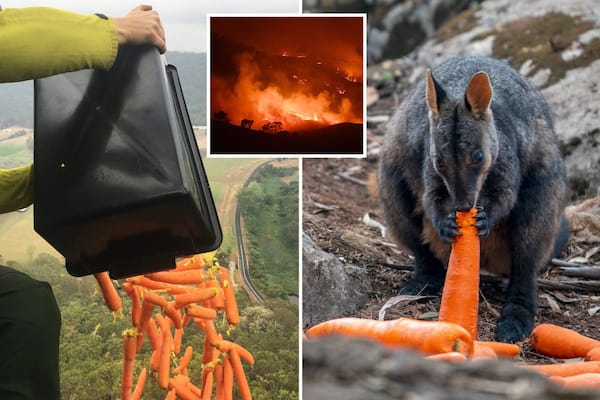 In the hope of counteracting irreversible damage affecting the livelihood of Australia’s at-risk marsupial population, the New South Wales (NSW) government recently launched “Operation Rock Wallaby”. Australian aircraft have drop vegetables to feed thousands of starving animals. They have taken this action to provide nourishment for the innocent and endangered.

They have been delivered up to 5,000 pounds of vegetables across the continent such as Yengo National Park, Oxley Wild Rivers, and Kangaroo Valley.

NSW Environment Minister Matt Kean explains, “The wallabies typically survive the fire itself, but are then left stranded with limited natural food as the fire takes out the vegetation around their rocky habitat.”

The animals dead threaten to cross a tipping-point on a continent where 87 percent of wildlife is exclusive to Australia.

He also added, “The wallabies were already under stress from the ongoing drought making survival challenging for the wallabies without assistance.”

World Wildlife Fund reported that approximately 1.25 billion animals have died due to the bushfires across Australia.

Recovery Efforts Set to Continue with a Follow Up

Animals Australia is an organization that is feeding starving animals affected by the fire. They have got many amounts to lease aircraft and fill bags with grains to deliver below as donations. Missions were made possible after the skies cleared from smoke pollution.

Lynn White, Animals Australia spokeswoman said, “With roads likely shut for weeks, the risk of starvation for surviving wildlife in the area is very real. It would be tragic if there was a further loss of life because the needs of surviving animals were not being met.”

The NSW will provide food for all the afflicted areas. Kean adds, “When we can, we are also setting up cameras to monitor the uptake of the food and the number of variety of animals there.”