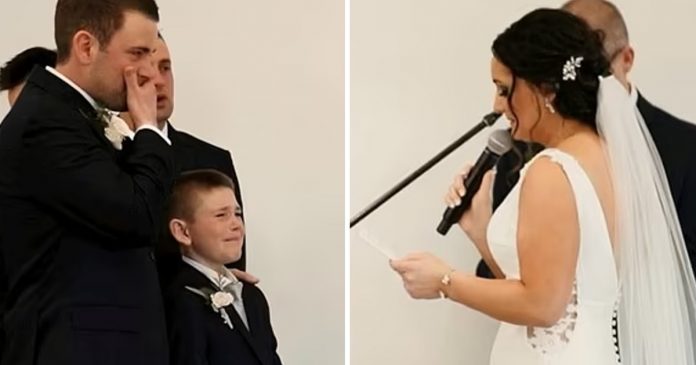 Recently, the story of a marriage went viral where the bride included her partner’s son in said vows, causing both the child and her, now, husband to be so moved to the point of tears.

Her name is Vanesa Lynch and, according to information from the Daly Mail , she wanted the 9-year-old boy to feel included in the marriage. That’s how she started her speech with him aside.

This message moved both of them and both Craig, the boyfriend, and Henry, the son, came to tears because they did not expect her to address a child who was not her biological son in that way: « I promise to love you as if you were my son And finally, I promise that I will be the best wife for your father. I also promise to be the best stepmom I can be to you ,” she concluded.

Vanesa had always wanted Henry not to think of her as a woman his father was married to, so she decided to include him in the speech. She was very cautious in doing so because, according to her words, Henry « is shy and gets nervous in front of people »

Since they both met, when they were studying at Augsburg College , Craig introduced Vanesaa to her little Herny and since then they have made all the plans where they can include him. He shares this note if you agree that the father is not the one who begets, but the one who educates.