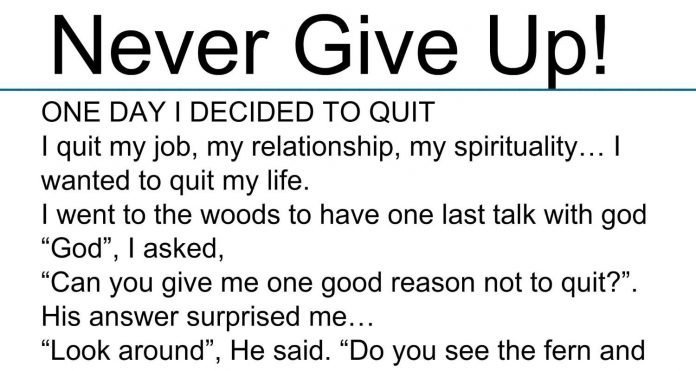 I was surprised with his answer.
He said, “Look around you. Do you see fern and bamboo?
I replied, “Yes.”

He said, “When I planted the fern and the bamboo seeds, I took care of it.
I gave them light. I gave them water. The fern has grown rapidly from the ground.

“In the fifth year, a small shoot emerged from the ground, compared to the fern, it seemed small and insignificant … But six months later, the bamboo reached more than 100 meters.
He had taken root within five years. These roots made him strong and gave him what it took to survive. I would not dispute any of my creations that she could not handle. ”

He asked me. “Did you know, my child, that you fought all the time and that you really took root?

“I will not stop bamboo; I will never stop with you.”
He said, “Do not compare yourself to others. Bamboo had a purpose other than fern.
But both make the forest beautiful. “Your time will come,” God tells me.
“You will go up.”

I asked, “How high should I get up?”
He asked, “How far will bamboo go?”
I asked again, “As high as possible?”“Yes,” he said, “Give me glory by being as high as you can.”
As soon as I left the forest, I reported this story. This story would help you see that God will never give up.