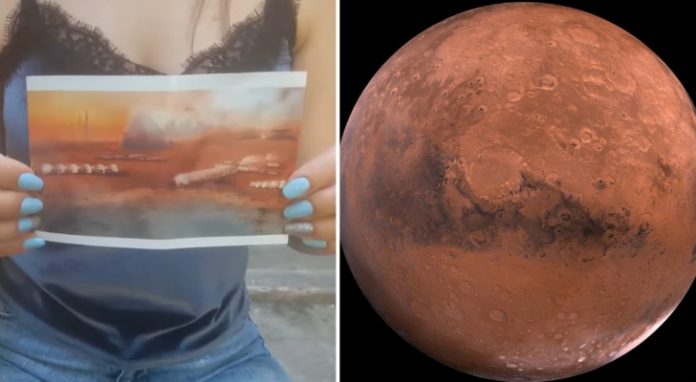 Being able to travel in time and living on another planet are subjects that have always been debated and, despite the many testimonies that have appeared on the web, these theories have never been proven. And yet, whenever people claiming to be from the future appear on the internet, disputes between users escalate, due to the obvious but inevitable curiosity about the subject. As in the case of a woman who claims to have been on Mars and come from the rather distant future…

She says her name is Mary, she was born in Georgia, she is 37 years old and belongs to the year 3812 . The mysterious woman showed on the web, as evidence to support her words, a photo she would have taken on nothing less than Mars. According to him, the red planet was inhabited by people from China.

The photo, released in an online video , would then show a city built on the host planet “I arrived on Mars, it looked like a desert with many buildings, I immediately took a photo,” said Mary. “Mars seemed to me very interesting and at the same time very strange.” According to her, “Only the Chinese live on Mars, because they have a global contract for the exploitation of minerals. They are supposed to bring from Mars the most expensive metals, almost 70%. Excluding these people, all others are guests visiting the planet as tourists.” Marie would therefore belong to this second category.

The skeptical reaction of Internet users was not long in coming. Someone wrote: “I listened to this video briefly and then saw the image of Mars. I couldn’t help but laugh because I had seen this photo before, but with blurrier images in the background,” while another commented, “You time travel for 17 centuries and only take one photo?”

Mary is certainly not the only one claiming to be from the future: a man named Edward explained that he was sent back to the year 3000 while taking part in a secret experiment in a laboratory in Los Angeles in the year 2004. Defying the laws of physics, the man said he had been tasked with photographing what the world of tomorrow would look like, giving a very scary description.

What do you think of their claims? Would you like to be able to travel back in time and find out what will happen to our planet in the future?