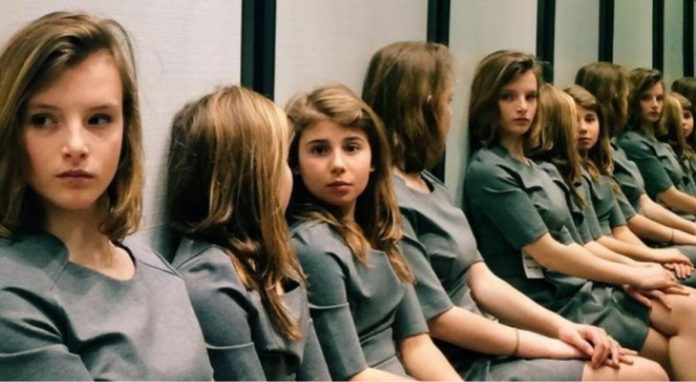 An optical illusion is a phenomenon that occurs naturally or is induced by specially designed tricks, in which the human eye is confused by the image it observes, seeing something that is not actually there or perceiving a distorted image of what is in front of him. Optical illusions are always fascinating experiences and when they happen to us, we can get lost for hours observing them, trying to discover their dynamics and understand what the reality is.

That’s why we often come across photos of optical illusions on social media, which are rapidly gaining popularity thanks to their ability to capture attention and spark heated and interesting debates. Among them, a photo with girls in a mirror game has gained a lot of notoriety and has been shared many times on social networks. Put yourself to the test and guess how many there are!

The image was originally shared by photographer Tiziana Vergari on her Instagram account and quickly went viral, winning over millions of users. The caption below the photo of a few girls clearly sitting in front of the mirror reads: “Equal but different.” But how many girls are actually represented in the photo? This is the question that has sparked a heated debate on social media with thousands of shares and millions of comments. Mirrors, as we know, are able to reproduce reality ad infinitum, but the real image they reflect can only be perceived clearly by stepping back from the scene and observing it in its entirety. together.

Looking at this photo, we can count up to 14 girls , but how many are actually sitting in front of the mirror? Few users managed to find the correct answer. “There are clearly four of them,” commented one convinced user. “Look how the reflections are. If you look at their face, the mirror shows the back of their head. If you see the back of their head, the mirror shows their face. The girls just look alike.” Many thought the correct answer was four girls who look alike; “two twins” commented another user.

And you what do you think ? Are you ready to find out the answer? If so, read it below.

20 Photos That Are Undoubtedly The Best Optical Illusions

18 stunning images of things that few people have seen

What Life Looks Like Before and After You Turn 30