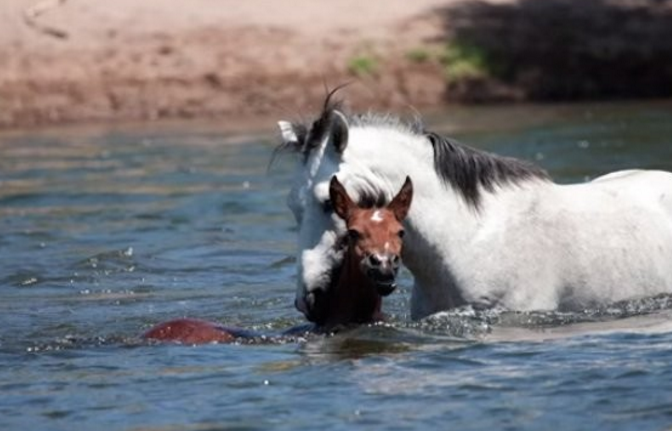 Nature is sometimes dangerous for wild animals because despite the fact that they are used to the changes and risks that exist in it, they sometimes find themselves in complicated situations that put the life of the animal at risk.

On the other hand, sometimes we come across certain news that pleasantly surprises us because they are about animals that adopt certain attitudes that are very surprising and that not all humans would do the same as them. Many people think that animals are not capable of feeling, that they simply move based on basic instincts, but all these people are wrong because on more than one occasion we have been able to verify that animals are also capable of moving based on feelings.

This is the case with a wild horse known as Champ. This horse, along with the other members of his family, lives peacefully in a natural park located in Tonto, Arizona (USA). The natural park runs along the entire bank of the Salt River and it is precisely there that another group of wild horses appeared, but on the opposite bank from where Champ and his family were. Evidently everyone was immediately interested in both groups of horses and many were the brave ones who began to cross the river to meet each other.

However, what could have been a nice moment to meet you turned out to be a tragedy when the strong current, coming from the river, caused a small filly to stay in the middle of the water and begin to exhaust herself from having swum against the current. The filly was sinking more and more and was about to disappear. Faced with such a situation, Champ separated from the group and began to approach her to try to help her and… He succeeded! This very brave and heroic horse did not give up and although his first attempts to grab the filly by the neck were unsuccessful the second time Champo managed to get a better grip and thus the filly was able to stay afloat.

On that second try, this wild horse had grabbed the filly by the back of the neck and never let go. So, being very careful, this hero managed to carry the little filly to the shore and never separated from her until he knew that the little filly was out of all danger.

Once they had both reached the shore, the filly was very nervous and went directly to her mother’s side.

When everything was under control and no one was in danger, Champ crossed the river and greeted the new horses as if they were old friends. Then our great hero stayed by his family’s side.

In this video we can see that contrary to what some people think, animals are capable of feeling and helping other animals that are in danger. Champ is a great example of bravery and courage. Sometimes heroes hide in places we didn’t think they would be.

Did you like the story of Champ? We found him to be a really brave horse!