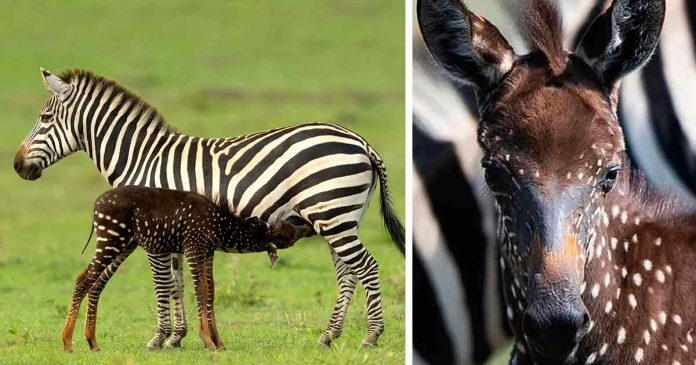 Here is a cute baby Zebra who was born with spots instead of stipes. It’s really amazing to see.

In Kenya, they’ve found a rare polka dot baby zebra, and whole the world is surprised to see him. His photos have gone viral on the internet. There’s a question remain in our hearts, whether zebras are white with black stripes or black with white stripe.

This cute baby zebra was photographed in Kenya

They have found this unusual zebra in the Maasai Mara National Reserve in Kenya. It was photographed by the photographers Rahul Sachdev and Antony Tira.

According to wildlife specialist named Parmale Lemein, from the Matira Bush Camp, this was the first such case of a polka dot zebra at the Mara Reserve. It’s said that the baby zebra has melanism, which is the opposite of albinism. But the sad news is that no similar zebras have survived past six months with such a condition in African parks.

According to some scientists when there’s an inhibition in melanin production these zebra stripes form and that the animal is most likely black with white stripes and not the opposite.

These zebra stripes aren’t just for show. They help the animals stay cool in the African heat according to Live Science. The stripes also help zebras hide from potential predators, and also help them avoid getting bitten by flies that are known to transmit diseases.

Share your comments with us whether zebras are white with black stripes or black with white stripes.