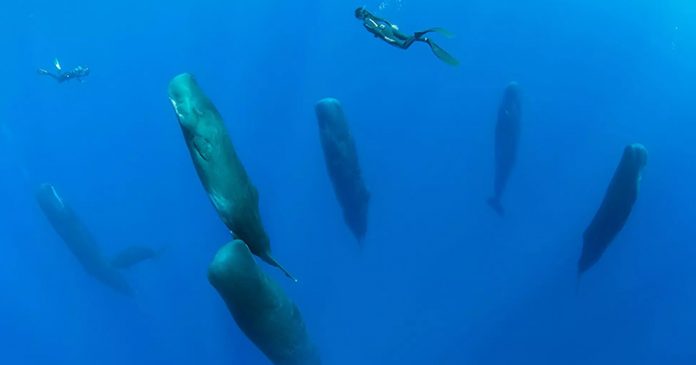 From bioGraphic, Sperm whales are sleeping in a pod facing up in the water:

When the sperm whales suddenly seemed to fall into a vertical slumber, photographer Franco Banfi and his fellow divers were following this pod of sperm whales (Physeter macrocephalus). In 2008, a team of biologists from the UK and Japan inadvertently drifted into a group of non-responsive sperm whales floating just below the surface. The scientists examined the data from tagged whales and found out that these massive marine mammals spend about 7 percent of their time taking short (6- to 24-minute) rests in this shallow vertical position baffled by the behavior. According to scientists, these brief naps may be the only time the whales’ sleep.

Photo was taken by Franco Banfi, a finalist in the 2017 Big Picture Competition.

Here is some more information.