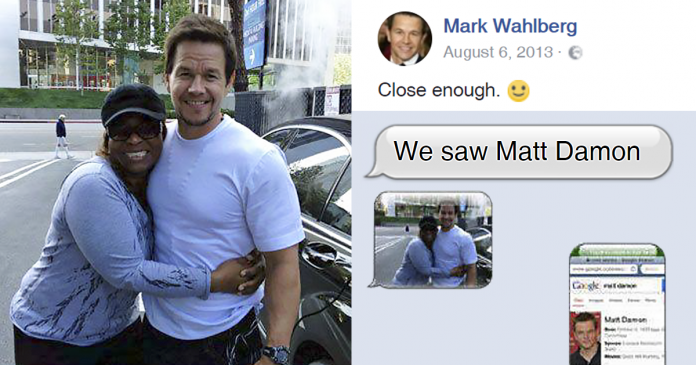 As we all know celebrities in real life look different from the way they do on screen. They use makeup, clothes, and lighting on sets and it can change their looks.  It might be confusing to meet a person that looks A LOT like someone you’ve seen on TV.

There are some people who didn’t even hesitate to snap a picture with a random stranger thinking they were famous. You’ll feel super disappointing if it really is the real Tom Cruise and you just missed an opportunity to snap a pic with him. You are maybe even more disappointing than realizing the person you took a selfie is not actually them.

Here are some pictures of “celebrities” that people have met. Sometimes you also would get mistaken by their looks.

Here’s Me Before A Hugh Laurie Concert, With Some Guy Who’s Not Hugh Laurie

Hate To Break It To Ya Buddy

Wow, What Are The Odds Of Finding Robert Downy Jr. In A Small Texas Mall?

3 Years Ago, Happy Drunk, I Thought I Met Jake Gyllenhaal… I’m Now 90% Sure I Didn’t

A Homeless Man Convinced Me He Was George RR Martin

I figured it out like a week later when he was still there with his ‘agent’ and his trolley. i had to walk past him everyday for a couple weeks and i avoided eye contact with him because it was too embarrassing on my part.

She Thought She Met Tyler The Creator

That’s Not Him Sweetie

Been A Year Today Since She Thought She Met Ed Sheeran

Went To My Local Pub. Two Cute Girls Insisted I Was Andy Samberg. Kept Taking Selfies With Me. Bartender Took This. Best Photo Of Me Ever

Just Chatting It Up With Rod Stewart Himself

My Dad Thought He Met Will Smith At The World Cup

Friend Thought He Met Bono At Dreamforce In 2013

It’s Common… To Mistake Somebody For Somebody Else

Not Ryan Gosling. Actually Printed In A Magazine

Girl From My Facebook Feed Swore She Met Macklemore

Oprah Winfrey Was On A Flight

She Met Maklemore. I’m Not Going To Be The One To Tell Her

That Ain’t Me Bro

A Friend Of Mine Thought She Had Met Zach Galifianakis

Drake – Or Not Lol

That Time I Thought I Met Lenny Kravitz At Coachella…