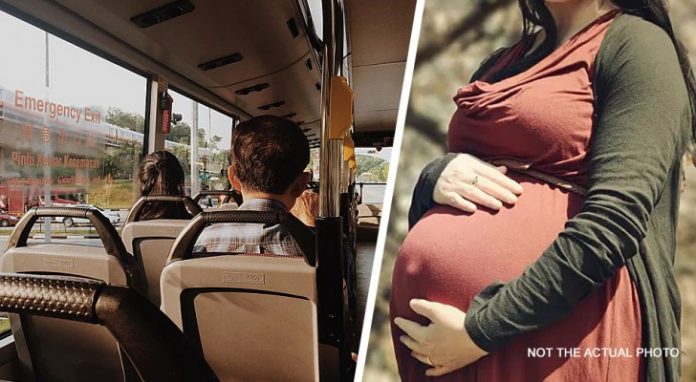 Anyone who travels daily on public transport knows that “cohabitation” with other passengers is not always easy. Annoying behavior, rudeness and irritating situations sometimes make you not want to get on a bus, tram or metro. It is not a constant, but there are cases where we see really negative episodes, like the one we are going to tell you about.

The woman at the center of this story is pregnant and, despite being eight months pregnant, she might not be able to sit down because of another passenger. If you think the man didn’t get up to seat her, that’s not the case, because there was an empty seat next to him, where the mom-to-be asked to sit. The answer ? ” You can’t sit down, my hand is sitting here “. At that point, the situation took a completely unexpected turn.

The episode was narrated and shared on Reddit by the pregnant woman herself, who asked users for their thoughts on what happened, and if she made a mistake.

Still, being pregnant and tired isn’t reason enough for everyone to show a little empathy. This is demonstrated by the following account of the young woman:

That day I got on the bus as usual and there was an empty seat, I went to sit down and on the seat next to me I found a boy with his hand on the empty seat. I asked him to remove his hand so I could sit down but he told me the seat was “occupied”. I asked by whom and he replied “by my hand”. I smiled but didn’t feel well, so I asked him to take his hand away so I could sit down, but he again refused.

What seemed like a joke was actually not one: the young man was actually preventing the pregnant woman from sitting down.

I tell him I’m tired and need to sit down and he responds saying my pregnancy isn’t his problem. I’ve had enough, my legs and back hurt and I decide to sit on his hand, occupying the empty seat.

The man then grew impatient, pulled his hand away and slammed the mum-to-be, calling her ‘disrespectful’ and ‘inappropriate’.

All the other passengers were staring at me, and even my husband, when I told him what had happened, told me that I shouldn’t have behaved like that.

In addition to the difficult situation, she also felt guilty over these criticisms. That’s why, a few days later, she decided to ask Reddit users if she was really wrong to sit on the man’s hand. And the answers came in droves.

Thousands of people reacted to the post and commented on it, most expressing their solidarity with the mom-to-be and publicly recounting similar situations they have found themselves in. Apparently, it is not so obvious to see in public transport kind and altruistic gestures towards people in difficulty. Giving places to pregnant women is by no means a constant: this story – and many others – prove it.

What do you think ? What would you have done in the place of the future mother?