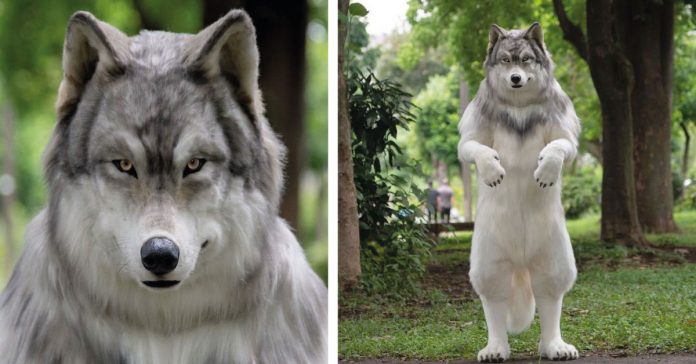 At present it is quite common to find all kinds of stories and cases that surprise us due to the improbability of the situation, we have seen or heard of married women with rag dolls, with men dating inflatable dolls, with women who feel like babies or dogs.

Recently, the story of a Japanese man who bought a realistic dog costume came up and went viral, but now another guy appeared who was looking for something similar, he simply wanted to fulfill his dream of being a wolf at all costs.

It was approximately more than 22 thousand dollars that this person spent, whose identity has not been revealed. The money was used to have a custom suit made so that he could transform into a large gray-furred wolf.

“Because of my love for animals since childhood and some realistic animal costumes that appeared on TV, I dreamed of being one one day. In the final test I was amazed at my ‘self’ transformed in the mirror. It was the moment my dream came true ,” he explained.

Zeppet , is a Japanese company known for creating realistic sculptures and models for various movies, which is why it dared to ask for a wolf costume for the man who dreamed of being that splendid animal.

For almost 50 days, those in charge of the costume did their best and made an effort so that everything was to their liking and to make it fully adapt to their body. In the end, when the delivery was made, the man was very happy with the work.

“My command to ‘look like a real wolf walking on hind legs’ was difficult to say the least, but the entire costume looked exactly as I envisioned it,” he said.

Apparently, the company exceeded their expectations and congratulated them for fulfilling their preferences, since they included each of their specifications, for example, they made the ventilation slot imperceptible and they put devices to be able to use the costume without help.