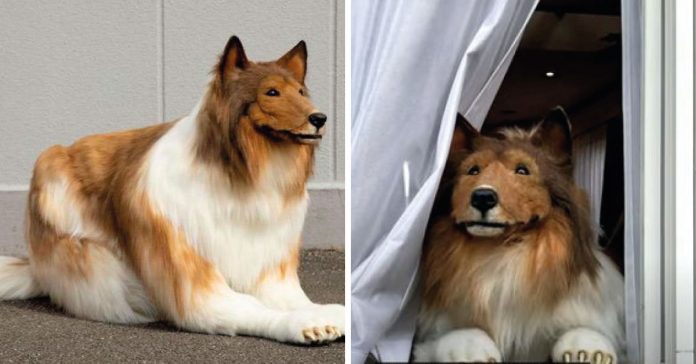 Although he is afraid that his friends will reject him, he is very happy to finally be a dog.

As children we always dream of growing up to become something we admire, like an astronaut, a singer or a dog trainer. However, there are children who have slightly different dreams from the rest of their friends; for example, turning into a dog.

Although in general, many of these dreams are not fulfilled because people change their interests; for this Japanese man it was not so. Identified as Toco , the individual decided to leave behind his daily life as a person to start living as a border collie dog.

And fulfilling this dream cost $15,025 . But without a doubt, Toco is proud of the result because he achieved a hyper-realistic costume that would make more than one doubt if it is a real dog.

The Japanese company Zeppet was in charge of making this wonderful suit. The creation took 40 days as Toco constantly requested improvements because he wanted it to be perfect. Zeppet is known for making realistic sculpts and models for movies and the costume work was exceptional. A representative of the company assured that they spent a lot of time on research to make the physiognomy of the human match that of the dog. In addition, they collected photos of the specimen from different angles to make the beautiful fur look natural.

Now, this border collie with a human inside shares his life on the internet.

The man dons the suit several times a week and lives the best life as a herding dog. In addition, he decided to create a YouTube channel called I want to be an animal (I want to be an animal) in which he shows his day-to-day life as a dog. His followers can see him learning to eat, play and even do tricks just like a normal puppy would.

According to The Mirror , the man is extremely happy with this new facet in his life. However, that does not save him from negative feelings because he is insecure about what people will think and say about him, especially those he knows. That is why he has not wanted to make his human identity public and in none of his videos does he show his face.

“I rarely tell my friends because I’m afraid they’ll think I’m weird. My friends and family seemed very surprised to learn that I turned into an animal,” he confessed to the outlet.

Despite this fear, Toco is not willing to stop doing it because it is something he really loves and gives him joy. « Since I was a child I have had this non-specific fantasy of becoming an animal. I wonder if it was a desire for transformation ,” he added. He also stated that he chose to be a border collie because it is his favorite breed of dog.

Currently, he has 12,800 subscribers on YouTube and his videos have an average of more than one million views . This means that Toco in his excellent dog costume has been very well received by Internet users.