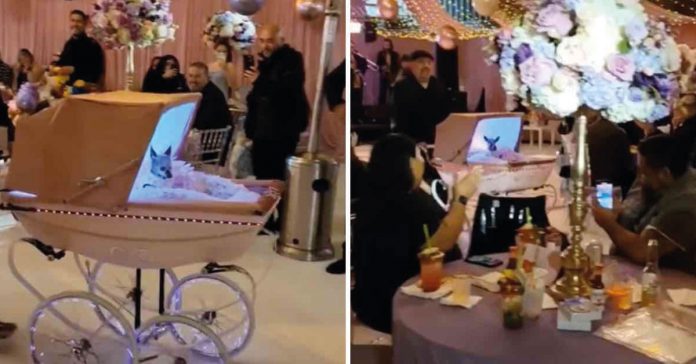 “People say, ‘Oh, you wasted money,’ but no. I’m celebrating something that means a lot to me, so I spared no expense. It was a very expensive night, but very memorable,” said comedian Gabriel Iglesias.

Gabriel Iglesias is a well-known comedian in the United States and has recently been in the spotlight, but not exactly because of his work. Recently, the comedian threw a peculiar and expensive party for his little chihuahua named Risa.

The man spent $100,000 on a lavish quinceañera-style party with more than 300 guests, including other puppies. Through social networks, he showed all the details of the peculiar party, which aroused the curiosity of users.

The video begins with him carrying Risa in his stroller. The dog wore a delicate pink dress and all attendees dressed according to the solemnity of the event. Some even filmed excitedly while Gabriel and Risa walked down the middle of the hall. ” I gave my little princess Risa the most epic quinceañera party!” Gabriel commented in the description of the clip, which has been reproduced 1.8 million times and already has 305.1 thousand “likes”.

The event generated quite a bit of interest in several of the local media, so the comedian spoke to Today to tell them that he had come up with the idea after seeing a young man throw a quinceanera for his dog.

“The party included a variety of food including mini al pastor tops on the tables, bacon wrapped hot dogs, carnitas, esquite, corn on the cob, a fresh water station and more,” as reported by the outlet.

Similarly, there was a live band, DJ, violinist, giant robot men, artists inspired by Cirque Du Soleil, dancers, and a show by a man with his dog.

“I went crazy and people are like, ‘Oh, you wasted money,’ but it’s like, no. I’m celebrating something that means a lot to me. I’m not spending money every day. But tonight in particular, yes. So I spared no expense. It was a very expensive night, but a very memorable one,” she concluded.