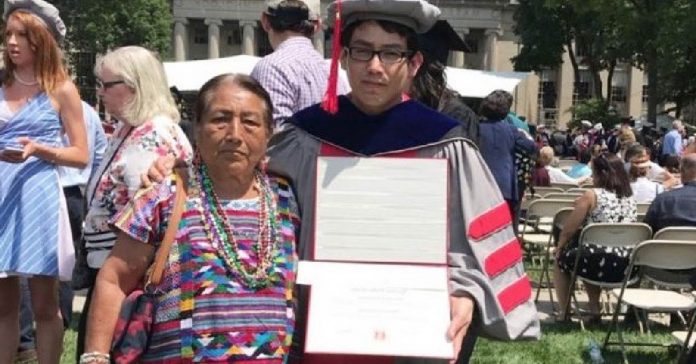 He was always clear that he wanted to study and after a lot of effort, he managed to become a doctor with a specialty in physical chemistry.

A constant question that children are asked is about their disturbing future. “What do you want to be when you grow up?” resonates with the children’s community. Some want to be astronauts, teachers, airplane pilots, veterinarians, lawyers; etc etc.

However, with the passage of time these desires can change and upon reaching adulthood, they end up dedicating themselves to something totally different. Although there are some cases in which the conditions are not favorable for these little ones and they end up abandoning their studies because they have to work.

Ricardo Pedro Pablo is a young man from Oaxaca, Mexico, who had to start working at a very early age. Despite this, he was sure from a young age that he wanted to continue his studies and achieve great things.

Leaving aside his childhood, he began to sell fruits and vegetables to help his mother with household expenses and, incidentally, save a little money. Ricardo planned to earn enough to pay for a university degree.

When that time came, the young man moved from his home in the Cuenca region to Mexico City to study at the chemistry department of the National Autonomous University of Mexico (UNAM). But this would only be the beginning because Ricardo had to work twice as hard to stand out from all his teammates.

Thus he became an exemplary student who obtained a Conacyt scholarship to study in the city of Boston, United States. In 2012 he entered the Massachusetts Institute of Technology (MIT), from where he graduated with a PhD in physical chemistry.

But Ricardo plans to continue studying and succeeding in a foreign country. He intends to do a postdoc and continue his projects and research in the MIT lab.

In addition, the young man became the greatest pride in his family. His mother was present at the graduation and wore a typical huipil from Cuenca, showing her roots. Ricardo is one of the many examples that show us that when you want you can and that all efforts are rewarded.