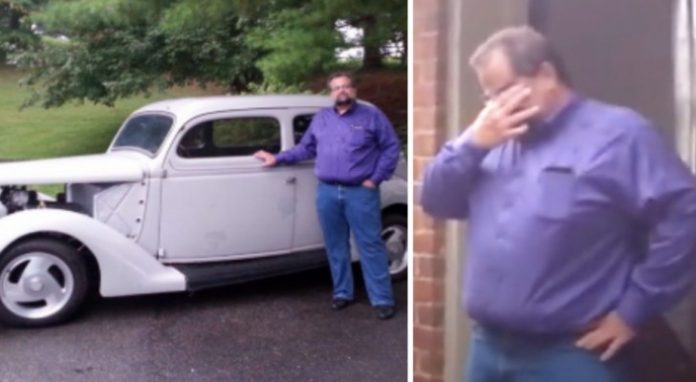 A parent would do anything for their child, especially for their future. Every father or mother would love to see their child graduate, with a job and a family. To make this possible, he would even go so far as to give up his own passions.

For this man, the biggest passion was his classic car. However, sometimes in life you have to make sacrifices and he decided to sell his car to pay for his daughter’s school fees . On the other hand, good deeds always trigger positive mechanisms. In this case, after twenty years, the goodness of this father was rewarded.

Since his youth, Randy Martin has had a great passion for vintage cars , so much so that he had managed to buy a 1936 Ford Sedan . A car he had undertaken to restore himself so well that it looked like it had come straight from the dealership. He thought he would never part with it, but life has surprises in store that aren’t always positive. This man chose to put his family first and sold his beloved car to pay for his daughter’s school fees.

This car, although sold, however, continued to remain in Randy’s mind, he constantly talked about it, going so far as to say that one day he would buy it back. Stéphanie, his daughter, who thanks to the proceeds from the sale of the car was able to continue her studies, chose to reward and return the favor to her father’s gesture of love.

That’s why, as soon as she could, the girl went looking not for a vintage car, but precisely for this Ford Sedan from 1936 that had paid her school fees twenty years later. early. After some research, she discovered that the owner lived in New Orleans. In order to buy it, she conducted a fundraiser and ended up achieving her goal.

Everyone was ready to immortalize Randy’s reaction when the surprise was revealed to him. As soon as the man saw his car, he couldn’t hold back his emotions and tears started to roll down his cheeks. Stephanie, after twenty years, had succeeded in rewarding her father’s gesture and that made her extremely happy.

Have you ever done such a thing to make a loved one happy? What have you done ?