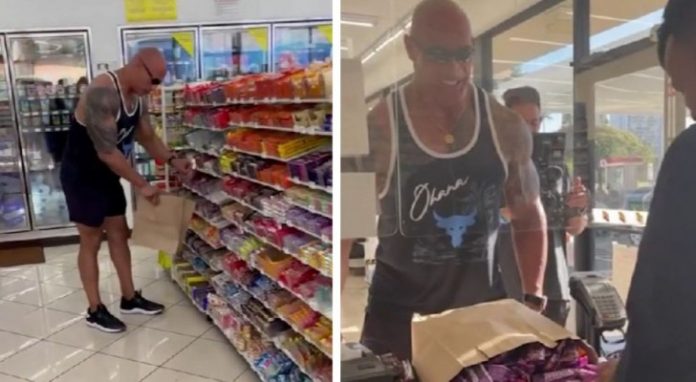 It is increasingly common for public figures to be noticed not only for their athletic or acting skills, but also for their selflessness and kindness. One of them is certainly Dwayne ‘The Rock’ Johnson , a third-generation film actor and professional wrestler, known to the general public for his sports performances and his roles in films such as ‘Fast and Furious’ and ‘Black Adam’, but not only.

The actor is also very active on social media, where he often shares interesting health and wellness videos and frequently shows up in the company of his family or involved in acts of generosity and friendly interactions with His fans. In one of these videos, the actor explains that he finally wants to make up for, after decades, a mistake he made when he lived in Hawaii as a teenager.

During his teenage years, Dwayne Johnson lived in Honolulu, Hawaii, where his life wasn’t always so easy and he made some early mistakes. The man admitted, in fact, that he regularly stole Snickers King size bars from a 7-11 store; the bars were his pre-workout snack but he couldn’t afford them, so every day he walked into the store and stole one.

Now, decades later, the great actor has returned home and, to the astonished gaze of store staff and customers, he has finally been able to make up for his teenage mistake. In the video shared on his social networks, the actor tells the facts before entering the store and asking the employee to show him the radius of the chocolate bars. There, he takes all the Snickers bars from the shelf and puts them in a paper bag, before proceeding to checkout.

While the seller was counting all the bars, the actor explained to him the reason for his gesture and then invited all the customers present to approach the cash register to pay their bills. After paying, Dwayne left the bag with the bars on the counter. “I’ll leave this here. If anyone looks like they want to steal Snickers, give them one of these so they don’t”.

Outside the store, the man, content to have finally made amends, mingled with the fans, posing for several photos with them before concluding his video. “After several decades of wanting to go back to 7-11 and doing well, concluded the actor, this gesture makes me feel really good.” This is certainly a great example of humanity teaching us that we can all make mistakes at some point in our lives, but all mistakes can always be corrected. Cheer !