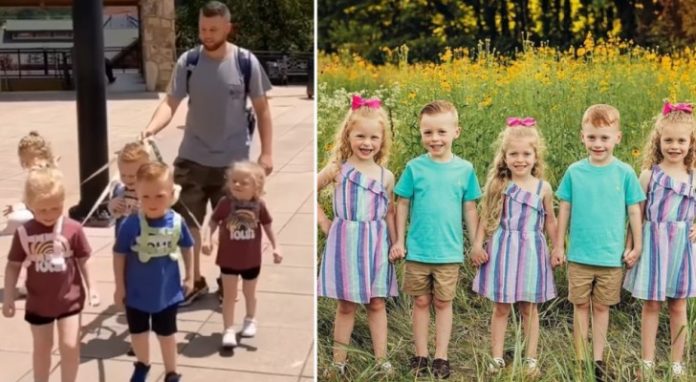 With the use of social networks , it is increasingly common for parents to post moments shared with their children , from the cutest and tenderest to the funniest, arousing the laughter of Internet users . The latter, however, could in certain cases judge as inappropriate content a video or an image published with irony, triggering a series of divergent but, for the most part, unanimous considerations. This is the case of the clip shared by an American father , in which we see the man carrying his five twins on a leash, triggering the ire of the followers.

Little did Jordan Driskell , a 31-year-old dad living in Kentucky, imagine the flood of criticism he was going to receive for sharing a video that was  probably very sympathetic from his point of view. However, Internet users who commented on him, accusing him of treating his children like animals, were not of the same opinion. Others, on the other hand, were sympathetic to his system, endorsing and supporting it .

Someone wrote, ” They’re not dogs. Why don’t you teach them what to do?” while another user commented in a completely opposite tone, “I support you 100 percent. I used a leash with both of my kids. Do what you need to do to keep your kids safe. “

The second Internet user seems to have guessed the desires of the young dad, who appears in the video walking with his five children , all twins, with the curious leash attached to their backs. The caption reads, “When people judge me for using kid leashes…try walking a few miles in my sneakers.”

Mr. Driskell explained that he and his wife made this choice for reasons of peace of mind, to be able to go out and do things together like any family, but without the fear that the children, who are still small , do not move away. A way, therefore, to keep them under control, without exhausting the days with constant and useless thoughts.

“Children are so curious,” he says , “they want to escape and explore. For our peace of mind and balance, we use the leash. It also allows us to get out of the house and do things. family fun while we relax. Plus they want to walk when we go to crowded places: a leash gives them the opportunity to do that and we stay in control. They love it. “

What do you think of this dad’s choice?