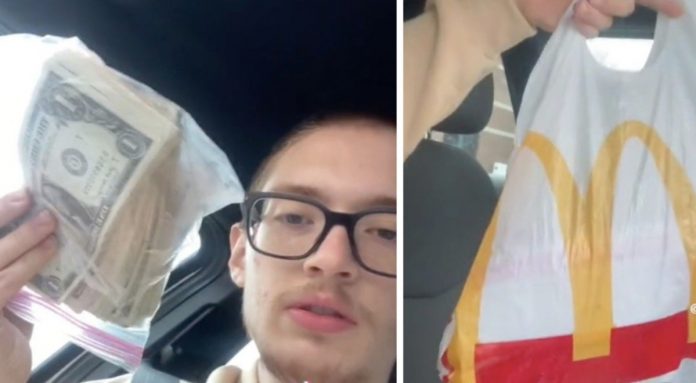 When ordering takeout, it can happen that there is some confusion and that the employee makes a mistake when distributing the bags, or the cook himself, when packing the order, makes a mistake. , putting in the containers something totally different from what was requested. If such a thing were to happen, the customer would be disappointed upon opening the package containing their meal. But what if, instead of finding food in the bag, we found money?

That’s exactly what happened to the boy in this story, who, instead of his order from the McDonald’s bag, found no less than $5,000 .

Josiah Vargas, known on social media as dookiedoeboy , shares many videos about his life on his TikTok page. One video among all the others, however, was a big hit, reaching 258,000 views. On this occasion, he wanted to immortalize the mistake made by McDonald’s employees.

The boy had gone to the café to buy a sandwich, but when he was given the bag containing his order, he was left speechless, as he did not find food, but money. Someone had made a mistake and handed him a bag with $5,000 inside . At that moment, the question that Josiah asked himself was: what to do? Go back and give the money back or pretend nothing happened and go home?”

Honesty is something innate; it ignores reason. It was precisely for this reason that Josiah, after initial hesitation, gave no further thought and returned to return the money. The employees, when they saw the boy return with the money, rejoiced, because this mistake of distraction could have cost them dearly. Fortunately, the money had fallen into the hands of a young man of moral integrity .

Josiah’s kindness was rewarded. He received $200 and the opportunity to eat free at this McDonald’s location for a month . However, in another video posted on TikTok, it shows an employee who was unaware of this promise and made him pay for his food.

What would you have done in his place?