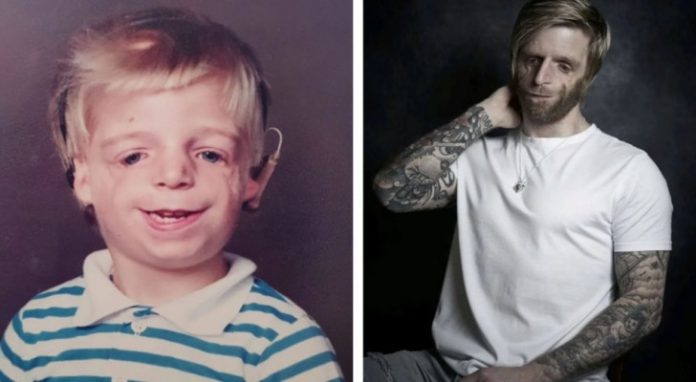 Not everyone is able to go beyond appearances, often letting themselves be deceived by the external appearance without looking any further. This only creates insecurity, pushing individuals not to believe in themselves, but above all not to accept themselves.

A society that would not stop to judge a book by its cover would be beautiful. Everyone should have the opportunity to show who they really are, without fear of being judged. This boy, on the other hand, understood how the world works from an early age, as he was abandoned by his parents because of his appearance . He had to learn to accept himself as he is.

His name is  Jono Lancaster, a 37-year-old man. His face is characterized by an underdeveloped jaw, the absence of cheekbones and peculiarly shaped ears. This is all due to a condition, diagnosed at birth, known as Treacher Collins Syndrome , which results in a malformation of the face and head.

Although the relationship with a child with a visible defect is difficult, every child deserves the love of their parents. Jono’s father and mother, however, disagreed and 36 hours after the birth they made the decision to give him up for adoption. The baby was therefore abandoned at birth. An indelible mark on his life, but his adoptive mother, Jean, chose him precisely because of his appearance, supported him and defended him against all prejudice.

“Mom Jean has always protected me. She took me in when I was only 2 weeks old and adopted me permanently when I was 5 years old. The hospital warned her about my appearance, but she always said the first time she saw me, she couldn’t help but smile.

Jono has spent his life trying to come to terms with his appearance, he has struggled with the prejudices of others who don’t look beyond first impressions. With time and the support of people who have always loved him, he managed to gain more self-confidence. This allowed him to become a model , but above all he decided to help all those who have the same syndrome as him and who do not feel accepted.

Perhaps this man will not forgive his parents, but their choice allowed him to live an amazing life. “They gave birth to me. It’s been a long road to get where I am. But I’m in a place of happiness and joy.”