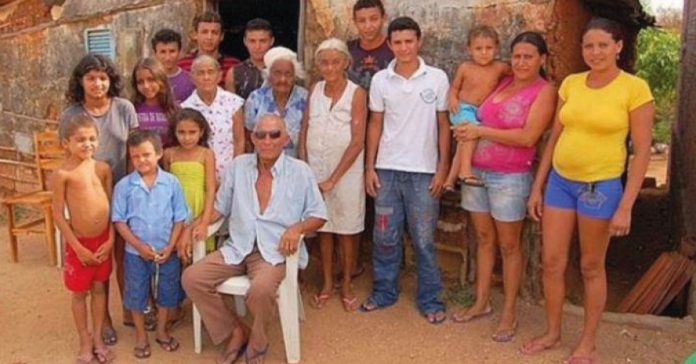 A 90-year-old farmer from Brazil has become news for his peculiar story. It turns out that Luiz Costa de Oliveira has 33 confirmed children and according to him there may be more than 50. His descendants are the result of the union with her first wife, with her sister and even with their mother.

In the state of Rio Grande do Norte, the Diario de Natal reported on the interesting family of Costa de Oliveira, who is a native of the municipality of Campo Grande.

There were 17 offspring with his first wife and when she died, a neighbor, Maria Francisca da Silva, who is now 65 years old, helped a lot in raising their minor children, their closeness led them to have 17 children together.

Later, Maria Francisca’s sister and Luiz’s sister-in-law, Ozelita, began to frequent her home and collaborated with the housework. As a result of this constant presence, another 15 children were born.

When you thought the situation was very peculiar, the mother of both women, 89-year-old Francisca Maria, also had a son with the subject. The birth order of the children is not known with certainty, but that is how things happened.

“What God did best in the world was women,” says Oliveira, implying that he may have more children scattered “out there” and of whom he is not aware, but he always accepted that he liked female company.

Luiz, his wife, his sister-in-law and his mother-in-law.

They also reported that some of his children died in poverty, but those who survived have given him more than 100 grandchildren and 30 great-grandchildren.

The man has also said that he does not remember everyone’s names very well, but despite the crisis and lack of money, the women affirm that he has never treated them badly. Apparently, they all live in harmony, in addition, despite Luiz’s advanced age, he claims to enjoy enviable health, he stopped smoking and drinking 40 years ago and does not have any serious illness.

So far there are no documents or external information that proves the degree of veracity of his statements, but if true, his story would be really very unusual.