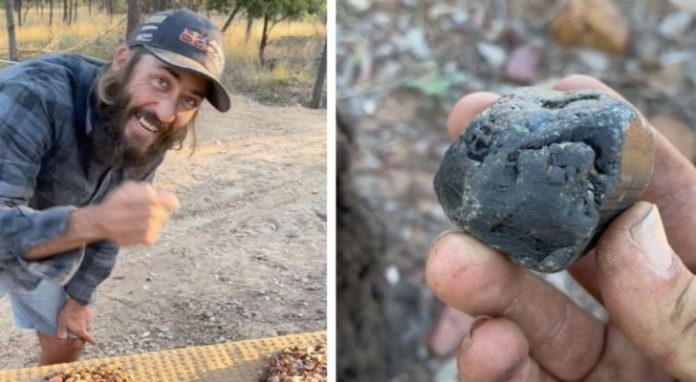 Many children, when they are young, like to play adventurers. Their imagination transforms everything around them into a new, unexplored world waiting to be discovered. Every little detail can become the key to a new adventure. One of the most common dreams is to find, like pirates, treasure chests or, even better, precious stones. This desire is even shared by adults, so much so that some have made it their profession.

Indeed, this man delights in looking for precious stones in the land near his home and shares his discoveries on his social networks. But this time, he made an extraordinary discovery…

His name is Matt Betteridge, known on social media mainly as betteridge_sapphires , and he lives in Australia, in a territory very rich in discoveries. He very often discovers precious stones there and testifies to everything through videos that he then shares with his followers on TikTok.

One evening, while he was walking near his house, his attention was caught by something. He turned to take a closer look and noticed that there was something shiny in the ground. At that time, he entered the house to take his cell phone. He knew he would find something amazing and wanted to demonstrate it with a video.

He started digging into the ground and when the stone came out of the ground, Matt realized it was an amazing find. He immediately understood that it was something precious. Indeed, as soon as he cleared it of the earth that surrounded it, a splendid sapphire, estimated at 834 carats , appeared in all its beauty.

“It’s the biggest I’ve ever found, it’s very heavy, like a piece of lead. It almost looks like a child’s fist.” Matt took the stone to a local sculptor, who explained to him that it was probably worth around $13,000 (same value in euros). In addition, he offered to cut it to make several jewels, but Betteridge refused because he believes that its beauty also lies in its size.

If you had made such a discovery, what would you have done with this precious stone?