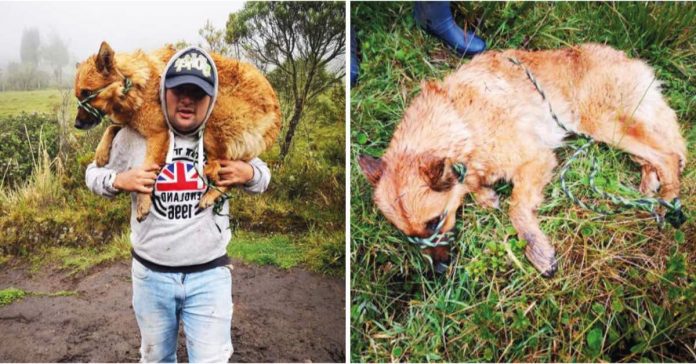 A young hero has arrived to give an abandoned dog a second chance. “She had to resist temperatures below 0, intense rains. She couldn’t walk, she cried from the pain, regardless of her barking and her attempts to bite me I managed to pick her up and carry her for more than 2 hours ”

Kathy is a dog that was abandoned in Los Nevados National Park in Colombia. To be more specific, in the valley of Frailejones tied between some bushes, we suppose that with the intention that she could not return.

Although the conditions are sad and frankly one would expect the situation to end badly, Daniel Leandro appeared. This man, despite the difficulties, saved the dog that had been enduring temperatures below 0 and heavy rains for who knows how many days.

“She couldn’t walk, she cried in pain, no matter her barks and attempts to bite me, I managed to pick her up and carry her for more than 2 hours on the way to where I had my truck, I took her to the vet, they injected her and gave her medicine. She lasted more than 10 days without being able to move, now she does not walk perfectly, but you can see her happiness on her face ”

To accompany his story, Daniel published a series of images that serve as evidence of the journey he had to go through to get Kathy to safety. In addition, he did not hesitate to leave a message to encourage responsible care of the animals.

“If you are going to have a little animal, love it, love it, take care of it and protect it, they are the most grateful in the world, but do not abandon them, they feel”

If Daniel had taken a little longer, this story would have a different result, thanks to good people like him, this little animal had a second chance with a new loving family. You have to think very well before having a pet, they do not deserve to be abandoned, much less in this way.