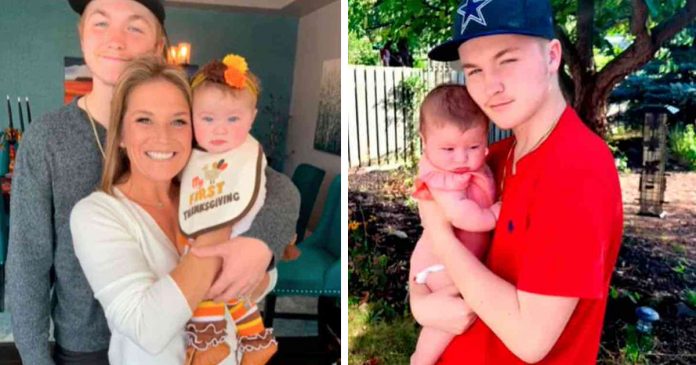 Michelle Ann shows on TikTok how her son is a responsible father by having full custody of her baby, since the mother did not feel ready to face it. That is why they reached an agreement for her to stay with the girl, and when she decides to see her they will not prevent her.

Having children is the desire of many people . Living the experience of being a mother or father is usually planned for when there is economic independence or when you are a mature adult due to the responsibility that it entails, which is very important and understandable. Although not all of them meet these characteristics, since teenage pregnancy most of the time forces many young people to prepare to take care of a baby for the rest of their lives.

Although it is women who most of the time assume the responsibility of taking care of their children when they are born while they are teenagers, there are also men who do it and are single.

On the TikTok social network, a grandmother named Michelle Ann has become known for showing on her account @elleann040 that a 16-year-old boy can be a good father, which is the case with his grandson.

The teenager has full custody of his young daughter Athena , and despite being too young to take on hugely demanding tasks , he has done very well . Through photos and videos shared by her on the social network, it is reflected that the boy has known how to respond correctly to this change of life.

She has also been a good grandmother, being very happy and proud of her father . Unlike many parents who distance themselves from their children when they become parents at an age that is not wanted because it is considered a mistake or “ruining their lives”, she perceives this in a very positive way and loves her granddaughter very much . . “I love you both. Mistakes don’t define you, she is our blessing ,” Michelle said in a TikTok video.

The grandmother explained in another recording of the social network why the mother is not seen and her son is the one who kept custody of the baby. The girl was very sincere in saying that she did not feel ready to be and face all the responsibilities that she entails, so the boy’s family agreed with hers to take care of her full time, according to O Segredo.

In the videos published by Michelle, a lot of tact is shown in showing the baby with her father, and the young woman is not mentioned so as not to expose her and also treat her respectfully . The relationship between everyone is very good, and when she wants to meet her or have some kind of contact they will not prevent her or anything from her because she understands her situation, according to the same site.