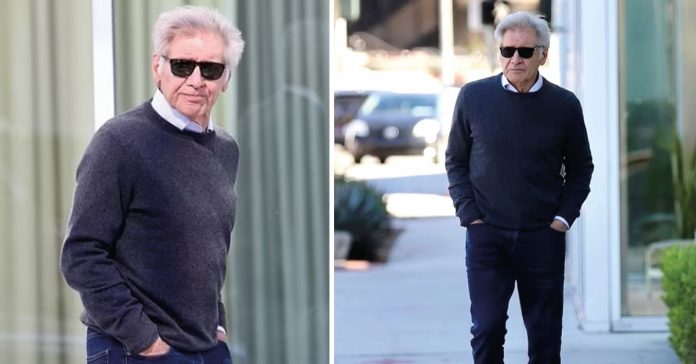 “Looks amazing for an 80 year old, makes me want to be fit,” one user wrote.

The renowned actor Harrison Ford stole hundreds of looks and sighs in each of his public appearances in his youth. After starring in great movies like Indiana Jones and Star Wars, the actor found a new stage in his career full of success where he showed off his style, elegance and beauty in an incredible way.

Not for nothing did he become one of the leading men of the golden cinema in his younger years and continues to be so today regardless of age.

And it is not in vain, because at 80 the distinguished actor continues to captivate thousands because of how good he looks at his age. There are some who even say that he looks “younger than ever”.

Daily Mail shared a series of images where Harrison Ford is seen walking through West Hollywood. The actor wore a casual look with dark jeans, a matching sweater and a shirt underneath in pure old money style. And in fact, it is a dress similar to what he used in his youth.

Showing himself more handsome and healthy than ever, the actor walked relaxed and with his hands in his pockets. He also wore sunglasses that were “the icing on the cake” to show that Harrison Ford is still a heartthrob at 80 years old.

The comments on social networks were not long in coming.

“He looks amazing for an 80-year-old, a lot of people at that age start to decline, but he looks great, younger than he is”, “he never allowed himself to be out of shape, he’s committed”, “he looks amazing good for being 80 years old, makes me want to be in shape”, “OMG, he looks too good in his 80s”, and “he looks even younger than several 45 year old men”, some users said.

At the moment, Harrison Ford is filming the new movie “Captain America: New World Order” which will be released in 2024, marking his debut in the Marvel Cinematic Universe.

In this new film, the actor will take on the role of Thaddeus Ross, a high-ranking member of the army who was previously played by the late William Hurt.