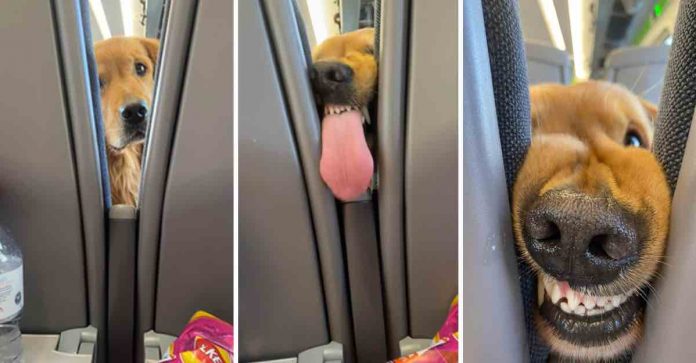 You have probably seen on occasion that puppies drool when they see something they would like to eat, even climbing on top of tables or stealing food from humans without them noticing.

A little dog riding a train, however, appears to have been less stealthy in his plan to whip out a serving of shrimp cocktail-flavored potato chips, as many figured out what he wanted to do, including, clearly, the owner of the snack

It was he who recorded and showed the funny sequence in which a golden retriever tries with all his might to pass between two seats to satisfy his hunger, but he is unable to because he is very big and cannot enter the small gap.

The clip, which was shared by @hugoandursula on Instagram, showed the frustrated pooch putting his paw on the chair, savoring the seat and even reaching his tongue all the way out to help him pull out a potato chip, and though he was inches away to achieve it, he did not succeed.

But he didn’t give up and bared his teeth at the passengers, almost as if he were smiling and begging for mercy. This last scene caused a lot of humor in various Internet users, who compared the image with the iconic face of Jack Nicholson while he looks through a door in the horror movie, “The Shining” (1980).

Many people also commented, moved by the action of the hungry puppy: “I couldn’t resist giving him my lunch completely”, “I would give him my snacks, my children’s snacks and I would even let the children go hungry. I mean, look at that face. I would give even my heart”, “Did it have a happy ending? For the dog, obviously” and “Dale. To the. All. The. Chips”.