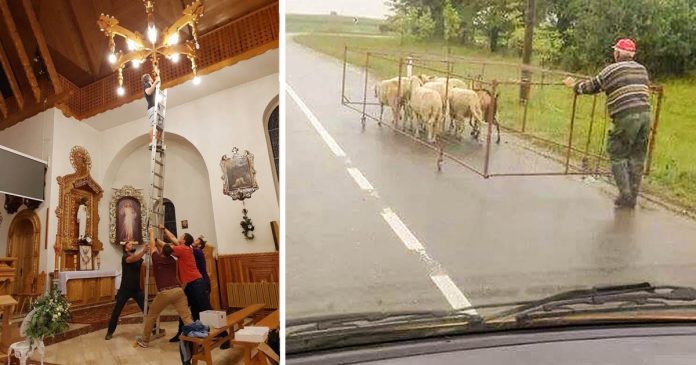 Many men would love to solve the female’s brain as it’s a mystery. But, it’s more important in sometimes to understand men’s mentality when they face a problem.

We’ll just think that men have a built a random idea generator that they suddenly come up with a crazy concept. But, you’d never know what it might come up for you next time.

Here we have 17 men who could probably find their way out of the most complex situations in no time. Spoiler: these men are fearless.

When years of playing Tetris finally pays off:

I’ll do it, just hold the ladder.

“My parents got a new bed last night and my dad’s nightstand was too short. Problem solved: he drilled it into the wall.”

When you forgot your helmet at home but you still have a lot of work to do.

Men truly have weird relationships with stairs, don’t you think?

They definitely haven’t seen Final Destination. Otherwise, it would be impossible to explain their actions.

Apparently, eyelids are the best protection for your eyes.

This is too cool, even for Tom Cruise.

Well, at least your toes are safe.

“My co-worker repaired the linoleum floor in our office with cardboard and laminated it with tape.”

Imagine the level of trust between these 2 coworkers.

This is what “thinking outside the box” looks like.

If it looks stupid but it works, it’s not stupid.

“My dog hates getting his nails trimmed so my dad literally bought a purse and cut holes in it.”

Bonus: Men love to have fun in a big way.

This House Is Narrow And Tiny Looks Only From Outside...