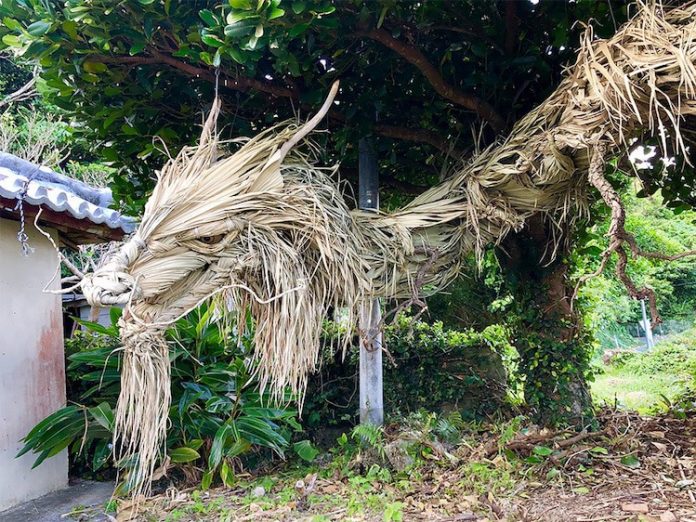 Japan hosts an annual arts festival called The Shimadakara which means “island treasure” in Uruma, a city in Okinawa Prefecture. Artists and crafters of the southern islands are celebrated at the festival. All the participants use natural materials found in their environment to create their art. A huge dragon sculpture, designed by Japanese artist and designer Ayako was this year’s showstopper.

The giant sculpture was named as Ryu Miyagi. The artist has used wood and straw from a Chinese fan palm. Ayako positioned the mythical beast as if it’s is peaking through the window of one of the village homes. Japanese folklore of an undersea palace called Ryūgū-jō, ruled by Ryujin (the dragon kami of the sea) was the inspiration for this creation.

An Okinawa local, Shiromadara posted images of the sculpture on Twitter. The sculpture was created with braided vines, dried palm leaves, and hand-carved wooden teeth and eyes. The natural elements make the dragon come alive with motion as if it is floating in the air when the wind blows.

Here Are Some Incredible And Detailed Sculptures Of Forest Animals By A Wood Artist.

You Can Purchase The Narrowest Home In London, Measuring At Just 5 ft 5 in Across For $1.3M

These Tiny Couches Are Crocheted For People’s Cats