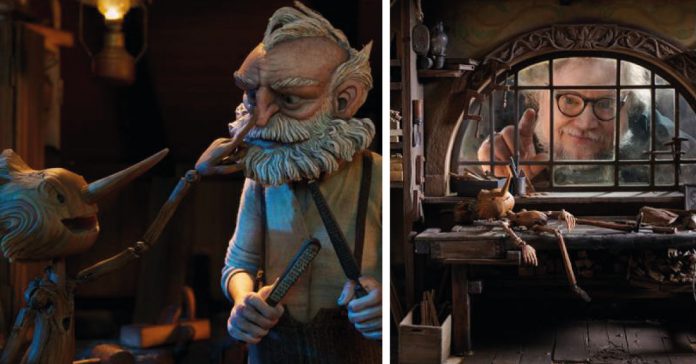 The Mexican director Guillermo del Toro opted for a different project but definitely very close to his heart, as he declared that it took him more than 10 years to be able to do it. The adaptation of the classic tale takes a completely different course, contrary to the live action that Disney released at the beginning of the year.

Everything seems to indicate that the Mexican version is full of philosophical references and reflections with a dark and fantastic touch. Something that the work of Carlo Collodi, original author of the 1883 story did not have and that many years later, Disney did not reflect in his animated film either.

The director has a characteristic style and that is what has led him to be among the best in the industry. With his Pinocchio, del Toro metaphorically introduces different interesting and real concepts, as well as the coexistence of life and death.

In fact, another of his great successes is to locate us in the time-space of the characters with small clues and references to the time, he captures fascism without meaning or seeing how it really was.

The animation of the tape is an absolute work of art, the work and effort is reflected in each scene. Guillermo takes advantage of every moment he has to inject a dose of innocence and thus lighten tensions or dense topics.

The rawness and beauty of what it means to be alive is one of the pillars of the film, as well as understanding the ephemeral nature of life. We’re all going to leave at some point and that’s okay; that is one of Pinocchio’s messages, in addition to valuing the presence of loved ones to our loved ones.

“The idea that I have of death is not really fatalistic, but vitalistic. It is easy for a Mexican to say it and make sense of it. There is a poem by Jaime Sabines that says: “All my life I heard a voice whispering softly in my ear: ‘Live, live, live.’ ‘It was death.’ he declared to the LA Times.

Pinocchio is not only Geppeto’s second chance to be a father and have someone by his side, but it is also a lesson, a magical puppet act to make him understand that he is not his son and that he never will be.

It is important to mention that the director unfortunately lost his mother one day before the premiere of his film and far from taking time to grieve, he wanted to honor her in the best way he can: show the world the project for which he work.

“My mother just passed away. This was very special to her and me. This isn’t just the first time you’ll see the movie; it is the first time that she will see it with us, ”she commented during the premiere at the London Film Festival.

Pinocchio is not just about a wooden doll that wants to be a real boy. No. He goes beyond that, he talks about accepting ourselves as we are, valuing life, enjoying it, loving without prejudice, changing, transforming ourselves, and learning to be better human beings.

The tape is available on Netflix and in different theaters in Mexico.

6 Proofs That Looney Tunes Are Better Than Today’s Cartoons