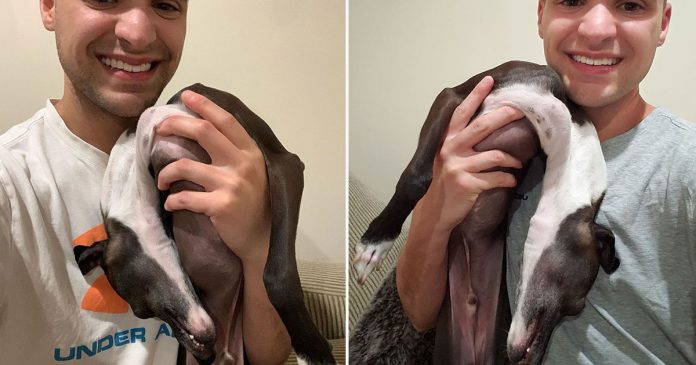 Although it sounds a bit strange, not everyone likes to take pictures. So some make a few faces, cover the lens, move, or pout to avoid having their photo taken. But in the case of Sparky, it goes much further.

Sparky is an Italian greyhound who doesn’t seem to be very happy when the camera lights shine on his face, and he makes it known. Although his way of expressing it is a bit curious, making the scene of a melted jelly is the best option to express his discontent. Every time Kennedy Simmons, Sparky’s owner, tries to pose with his dog for a photo, it seems that he does his ploy to avoid it . While turning into a boneless dog to avoid photos and end long photo sessions seems strange, it turned out to be very effective .

« When I take pictures with him, he has a certain tolerance. And when that tolerance wears off, he just drops, it’s almost like he’s throwing a tantrum. He goes limp, and from time to time he looks at me sideways, I do cruelly, as if to say: Are we done yet? “Kennedy recounted. But, although it seems that all the images are ruined by his attitude, it is quite the opposite . Well, they have become the entertainment of many followers on the internet.

His funny attitude makes all the physical difficulties he may suffer forgotten and he continues his life as a normal dog. Sparky’s owner has been working as a veterinary assistant for many years, where he is famous for taking in dogs with special needs that come to the clinic . In this way he adopted Sparky, after his previous family decided to give the little greyhound to the veterinary office to receive better care .

” They were a big family, but Sparky had to have surgery and they were really scared they wouldn’t be able to take care of him after he broke his leg ,” she commented. The only thing his old family wanted was a good home where they could give him all the attention and care he needed. Also, Sparky failed to recover properly from the surgery, so they had to amputate his leg, but this failed to change her joy of him.

« He has been rebellious since day one. If you don’t have your eyes on Sparky, he gets into a lot of trouble ,” she added. The most important thing is that the puppy was able to find a suitable home for him, and although he only weighs 5 kg, he lives his life to the fullest . When it comes to other dogs, he is very friendly and quickly becomes friends with them, but when he gains confidence, he likes to tease them a lot .

« He is so nasty with other dogs, he bites their tails and ears. But all the dogs end up loving him and are very tolerant of him ,” she said. Despite his energy, Sparky only dislikes posing for photos, but he leaves his owner’s phone full of hilarious pictures . Sparky is a character who makes people happy, but above all he loves his owner and he lets her know every time he comes home. Kennedy doesn’t care if she can’t get the perfect photo, after all, her unconditional love is the spark she needed in her life.

Share with your friends and family this adorable and tender story.