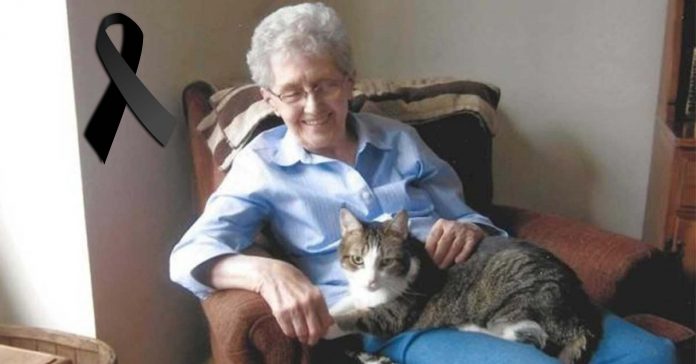 They lived together for many years and when the time came to leave, they also left together.

Humans form a strong bond with their pets, whether they are dogs, cats, birds, fish, or even snakes. No matter what type of animal you have at home, daily coexistence generates a practically unbreakable connection between the two.

The story of a woman and her cat are a clear example of this. From the moment they met they became inseparable and spent a lifetime together. However, it is time for all of us to leave this world and this pair did it almost at the same time, proving that they could not live without each other. Four hours after the cat closed her eyes for good, her owner did too.

Gabby the cat was two years old when a sweet old couple adopted her. The three of them became good friends and loved spending time together giving each other a lot of affection. She felt very comfortable in the arms of the two owners of her. Unfortunately, the man lost his life, leaving his companions alone.

Now the cat and the woman had only themselves.
They moved into a senior apartment complex where they would both receive proper care. In the place they were not only in charge of taking care of the grandmother very well, they also made sure that Gabby did not lack anything. They all witnessed the enormous affection between the two and how much they enjoyed each other’s company. They went almost everywhere together and during the nights, Gabby stayed awake taking care of her human.

But old age came for Gabby, too, and she knew the end of her days was near. The cat suddenly moved away; she preferred solitude to spending time in the lap of her owner, who for her part, diminished her appetite. The woman became very thin and her cat went the same way; however, everything seemed to indicate that Gabby would go first.

The woman took her feline companion to the vet, who told her it was best to put her to sleep. With all the pain in her heart, Grandma agreed and stayed by her cat’s side as she breathed her last. She did not leave her alone at the last moment of her life.

The old woman returned home to also leave this world.

Four hours after the event, the woman left in peace, probably to meet her beloved pet in the afterlife. Upon returning from the vet, the grandmother lay on the sofa, that was the last time anyone saw her alive. Within a few hours, she lost her life, to everyone’s surprise.

They really were inseparable and apparently, they could not live without each other. The moving story has amazed many, as both life partners left at the same time. This curious event shows us the incredible connection that can be formed between a human and his pet and also teaches us that animals can be much more than pets. They are good friends, partners and part of the family.