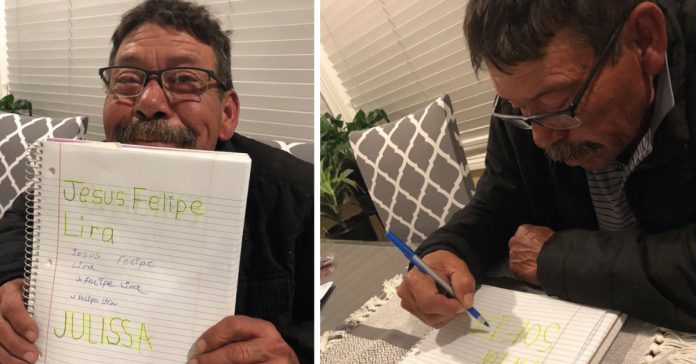 Access to education is not possible for many people and although in many countries it is mandatory to attend the basic years, not all families can afford that luxury. The illiteracy rate in the United States is 8.1% of the adult population and is surprisingly higher than in other equally developed countries.

Now if other factors such as migration and age are added, the figures can increase considerably. The story of Felipe Lira is one of the many that go through similar situations and that are not known until they go viral.

Mr. Lira has lived in California, United States, for many years and was never able to learn to write due to lack of resources. However, thanks to the support of his family and his desire to get ahead, he succeeded.

His great-niece, Kennya Ramos, took advantage of social networks to share the advances and progress of his grandfather, who after reaching his goal, the first thing he did was capture the names of all his grandchildren in his own handwriting.

“My uncle didn’t go to school so I’m teaching him to write and he wrote his grandchildren’s names for the first time,” Ramos wrote in the post .

Kennya had a great response from users and the post quickly went viral. In order to share more details of Don Felipe’s classes, she created a Twitter account for him and I don’t hesitate to thank him for the messages of support and encouragement. that they sent you.

“My uncle has cried with everyone’s love and support! Many of you want to keep up with your progress and so I created your own Twitter account! I will be posting updates at @eltiofelipelira . Thank you very much to everyone once again!!”, Said the young woman.

The desire to improve and not be left behind despite the circumstances were the motivation for Don Felipe to fulfill his goal and learn to write after many years and thus set an example to people of any age that it is never too late to learn.