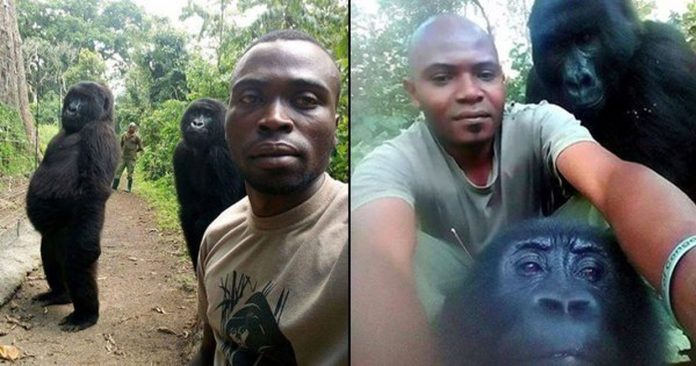 This could be the world’s coolest selfie.

You need to have a skill to take Selfies. In order to capture the perfect selfie, you should find the right angle, get the light right and work the pose correctly. We have seen many selfies of famous persons like no one else ever could over the years. And they have always been considered as setting the bar in clicking selfies.

There are very handsome gorillas that are pushing all barriers in the department of taking selfies in Virunga National Park, Democratic Republic of Congo.

In the lush forests of the Democratic Republic of Congo, we can find this Virunga National Park which is a UNESCO World Heritage Site. The site is still in danger as it is open to damage from the war and poaching activities due to the past few years of military turmoil in the region.  There are over 600 rangers who have come to save this Heritage Site and protect the gorillas living in it. You can find more information from Virunga’s website.

These rangers possess special fighting skills in order to be prepared for any sort of emergency situation. They have saved many gorillas, including the world’s critically endangered Mountain Gorillas. The rangers spend time happy times with the inhabitants of the National Park even though the work of the rangers seems like a dangerous and busy one.

These following pictures will show you what the workspace of an average ranger looks like.

The two most enthusiastic gorillas living in the Park is Ndakasi and Matabishi. This picture of a ranger with a tagline of “Another day at the Office” is very appropriately used as the two of them flexing their muscles at the back.

There’s another picture of Ndakasi and Matabishi which is titled Family Portrait. The family includes Ranger Patrick Sadiki with the two gorillas. The two look surprised or with curiosity while they compete to get the best selfie angle.

Here’s another picture of a gorilla that is riding on the shoulders of a ranger, holding him affectionately. This picture is titled, “Words to Live By- Sagesse Intemporelle”. As mentioned in the caption, the words to live by are, “When one is still young, it seems very simple to be a hero or a martyr. But as one marches on in life, one understands the price of a simple act of virtue, and only God can give us the strength to achieve this.”

These posers are excellently posing for the photos. At the end of the day, these rangers find their jobs heavily satisfying with the affection of these friends.

We should thank those who risk their lives on a daily basis to fight for our eco-heritage and for the inhabitants living there.