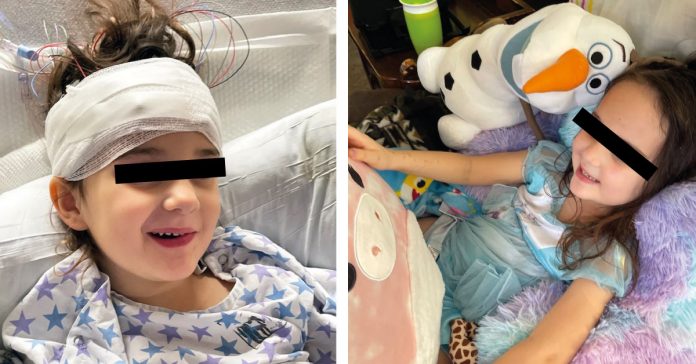 The little girl turned 5 years old and her parents organized an unforgettable birthday party for her that included letters from people around the world.

Birthday parties are very important and expected moments for children. They know that it is a celebration dedicated entirely to them, where they can play non-stop, eat a lot of cake and sweets, receive gifts and spend time with their loved ones. That is why an entire community organized to give the best birthday celebration to a girl since that would be the last.

This is Delaney Krings , a little girl from Pewakee , Wisconsin, who turned five years old on December 16 . Just on October 31, doctors at Children’s Hospital of Wisconsin diagnosed her with terminal brain cancer, and the girl’s life expectancy reached just 8 weeks . The doctors explained that the cancer had spread to so many places that the radiation would do more damage.

Heather Krings , Delaney’s mom, realized her daughter’s 5th birthday would be her last, so they decided to make it one to remember. The woman recounted that when her family and friends found out the terrible news, they wanted to support in some way and someone had a wonderful idea: collect cards with good wishes for Delaney.

Sharon Tomlinson , a close friend of the family, took charge of the collection. With the support of local media and people on social media, the news spread across the globe and people from all corners pitched in.

Her mother assured that the little girl obtained 15,000 birthday cards as well as hundreds of letters and gifts. Even researchers in Antarctica dedicated emotional messages to her and even an NFL player sent her good wishes.

From Arizona back home to Pewaukee, I hope you have a fantastic birthday surrounded by family and friends!

The people of Pewaukee also organized a parade through the city that included 150 vintage cars and vehicles from the police department and rescue team. Characters from the animated film Frozen also paraded; and of course, Delaney led the way in a horse-drawn carriage.

The little girl had her party where she ate cake and received lots of hugs and displays of affection. Delaney certainly had an unforgettable and happy birthday. Her mother explained that the girl knows that she has a small illness but she does not know the seriousness of the matter.

“Day by day we lose a little more. She knows she’s got an ‘owie’ in her head (and) she’ll probably start to feel a little worse. But how do you tell a 4 year old girl? She rips your heart out,” Heather mentioned.

At the moment, Delaney is in the hospital, accompanied by her parents and her two older brothers. She is surrounded by love and her mother ensures that she continues to be a smiling and happy girl. In addition, she mentioned that she begs God to grant her daughter a little more time on Earth, so that she can continue to bring light and love to the world.