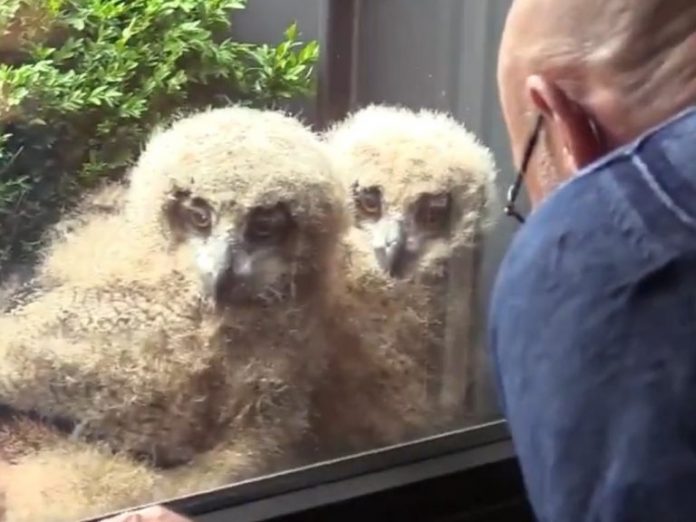 The world’s largest owl laid eggs in a Belgian man’s planter box. Now they don’t want to leave that place.

A Belgian man recently heard noisy birds on his balcony planter; he thought that it was those pesky pigeons again. But he saw three huge owl hatchlings when he finally went to take a look.

He found that they are members of the world’s largest owl species, Eurasian eagle-owls whose wingspan can reach 5-feet when they are fully grown.

Eagle owls are rarely found in heavily human-populated central Europe, and left mostly in Russia and Scandinavia, and cannot be seen much in nature.

But, these birds were hanging outside Jos Baart’s 3rd-story apartment window all spring, giving him a front-row view of their impressive growth.

Baart shared that they spend a lot of time looking at each other and when turns on the television they especially seem fascinated, lining up and attentively watching it with him.

We could hardly believe it when we got a message from Jos Baart telling us that Europe's biggest owl, the Eurasian eagle-owl, had made a nest in a planter in front of his window. Not only that, she had also hatched three giant chicks!#vroegevogels #springwatch #owl pic.twitter.com/gz1odkFLYC

All the time their mother owl keeps looking at them from behind the foliage in the planter.

Baart will miss them when they are full-grown and leave him with an empty nest. He hopes they’ll come again next spring.