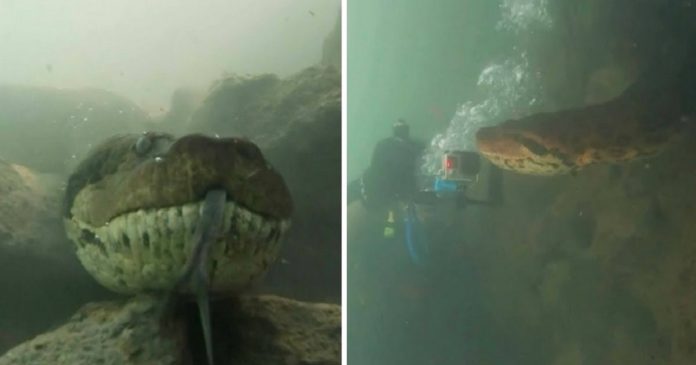 This is the most impressive underwater encounter: a diver came face to face with a giant anaconda seven meters long.

Bartolomeo Bove and his friend Juca Ygarape were diving in the Formoso River in Brazil in July 2019 when they came across the Green Anaconda.

The largest living snake in the world! This is one of the things to share on Facebook.

The video that is viral.
In the clip, the snake, which measured a head-to-tail distance of seven meters, can be seen lying on the riverbed.

The footage then cuts to the creature facing the camera head on and sticking out its tongue.

The 200-pound or so snake then decides to walk away, slithering away from Bove, who is holding the camera.

Instead of swimming around screaming like many of us would, (and don’t lie to me, you would if you saw an anaconda that big), he follows the snake, seemingly determined to catch it.

With this he achieves a better shot of the giant anaconda.

After all that, Bove’s determination paid off and he was able to get some absolutely incredible images of the creature.

He explained that his clip shows how huge snakes are misunderstood. And that they are not aggressive animals as people often think they are.

THE RIVERS AND BODIES OF WATER AROUND THE AREA OF ​​BONITO (AMAZON TOWN) ARE THE ONLY PLACES IN SOUTH AMERICA WHERE ANACONDAS CAN BE FOUND IN CRYSTAL CLEAR WATERS AND THEREFORE IT IS POSSIBLE TO DIVE WITH THEM.

Of course, if we found an anaconda of these dimensions, lurking like a phantom threat for its prey to arrive, you and I would run away in terror.

And it is that the green anaconda is the largest snake species in the world.

They can grow to a staggering 9.1 meters long and weigh up to 250 kilograms.

They kill by wrapping themselves around their prey, restricting the victims’ breathing with their powerful bodies.

They can also disengage their jaws so they can swallow corpses larger than their own bodies.

Sounds gloomy, huh? And yet this man, Bove, and his friend didn’t think twice about swimming to get the perfect shot.

AS SHOWN IN THE IMAGES, THE ANACONDA SWIMS CALM AND PEACEFUL, COMPLETELY INDIFFERENT TO OUR PRESENCE; SOMETIMES HE COMES CLOSER, CURIOUS ABOUT MY CAMERA [AND] LICKING THE LENS. THE BEHAVIOR OF THE ANACONDA DISPROVES THE MYTH THAT IT IS AN AGGRESSIVE AND VIOLENT CREATURE THAT CAN ENDANGER THE LIVES OF PEOPLE.

The Green Anaconda.
The green or common anaconda, of the Eunectes murinus family , is a species of constrictor snake belonging to the boas.

It is endemic to the rivers of the tropics of South America. Of all the snakes this is the longest and is made to rival the reticulated python for the title of the world’s largest snake, which is usually bulkier, but shorter.

They tend to attack a human being, except for self-defense, since they are not part of their food trophic chain.

With information from INFOBAE.