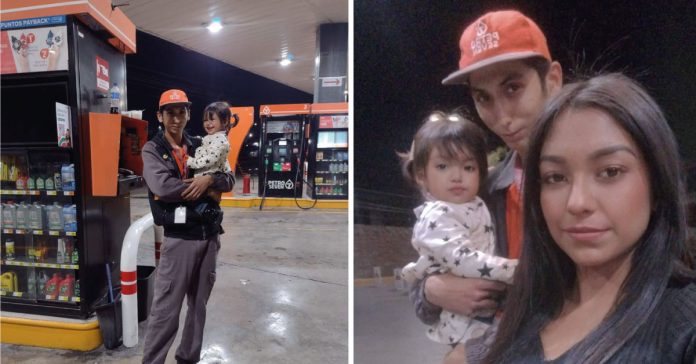 While the young man was at his job during the night shift, he received a nice surprise.

The December holidays are usually moments to spend with the family. It is a time to celebrate and give thanks in the company of all your loved ones. However, it is not always so easy to gather the whole family in one place as some have to work even on those holidays. This is because there are spaces that cannot be left unattended even on those dates; and for one to be with his family, another must be working.

This is exactly what happened to a young man named Alberto Flack , who, like many other workers, had to ring in the New Year at a gas station. The young man, originally from Mexico, had to work on December 31, 2022 in the night shift, so he would spend the celebration away from his family.

Although hardly anyone would like to work on those dates, Alberto maintained his sense of responsibility and went to his shift at the gas station as he normally would. But what he didn’t expect was that his wife and his daughter would pay him a visit so he wouldn’t spend midnight alone.

Fortunately, the young man has a united and loving family that did not hesitate to give him this nice surprise and so he would receive the year 2023 in the company of his loved ones.

The story became known thanks to Alberto himself, who shared a post on his Facebook account . He recounted that while he was on his shift, his partner and his daughter paid him a visit. They wished him a happy new year and spent a good time with him because the important thing was to be with the family, even if it wasn’t at home.

“Happy New Year group, they came to visit me at 12:00 am, have a great time if you are working,” Flack wrote in the group ‘Jobs posting 2: The SAT strikes back’.

His text was accompanied by a couple of photographs where we can see that the young man works at a Petro Seven gas station . Likewise, we met her partner and her daughter, a little girl of about two years old who is undoubtedly happy to see her father and receive her hugs.

The post quickly went viral and positive comments were immediate. Many users applauded the woman’s beautiful gesture for not leaving her husband alone. They also congratulated them for being a united family and pointed out that this was true love. Some more shared their experiences and, in general, left their good wishes for Alberto and his family.