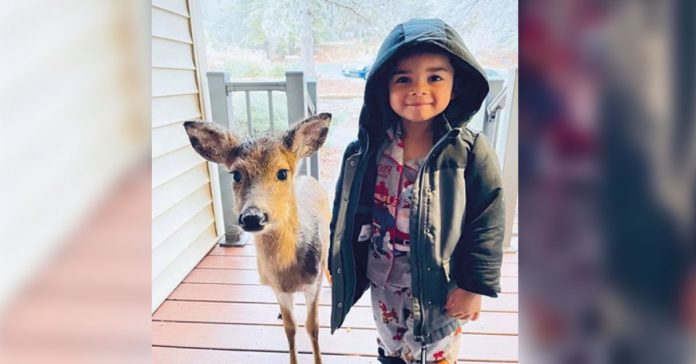 Having a pet implies a lot of responsibility and it is not easy, but it also depends a lot on the type of animal you have, the most common are puppies, cats, some birds or rodents and each of them has completely different needs.

Something that little Dominic Brown did not fully understand, who surprised his mother with a surprise that he will never forget. The Westmoreland County family was preparing to leave Massanutten (a national park with several amenities), while Dom was playing outside where they were staying.

Stephanie, his mother, says that she was taking out the food leftovers after her little vacation when she heard her son in the driveway cleaning his boots before entering the house. So far everything normal, however, her surprise took her when she saw her companion.

Nothing more and nothing less than a baby deer was by his side. “I couldn’t even speak, I was in ‘shock’. I thought, ‘No way, my mind is playing me,'” Brown recounted. The boy obviously did not understand the magnitude of his action and in the photo that went viral, he only shows a small grimace of happiness, minutes before having to say goodbye to his new friend.

After knowing the tender story of Dominic and the deer, the reactions in the networks did not wait and in a short time, the photo shared by his mother had more than 33,000 reactions and 7,000 comments.

That child has a gift with animals”, “How beautiful! A great friendship ”,“ When he was little he carried all kinds of animals, but never a deer, very cute ”,“ The most beautiful babies. They made my day”, are some of the comments that are read in the publication.

After taking the photo, the mother asked her son if they could direct him back into the woods, because his mother was most likely looking for him. After a brief period of convincing, they both returned him to his home and the family left.