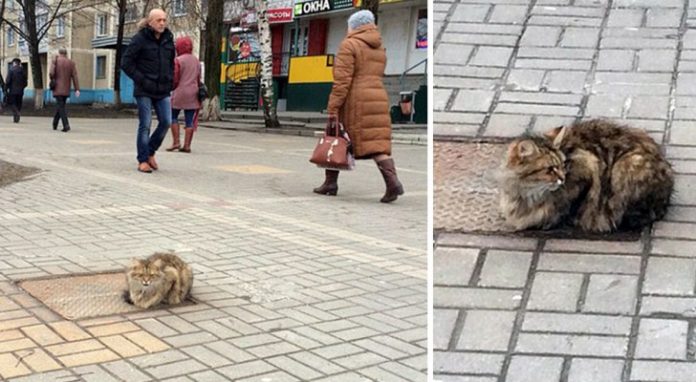 They abandoned him, but he didn’t understand The beautiful tabby cat in this photo was abandoned a year ago in Belgorod, Russia, by his owners who moved to another city. Since that day, the cat has been waiting confidently and patiently for their return, sitting in the same place. A lesson of faithfulness and forgiveness that only animals can teach us.

Neighborhood residents say the cat’s owners moved elsewhere, leaving him to his own devices. It is said that the cat ran after them desperately, when their car drove away, and they never looked back.

Since that day, more than a year ago, the little one has been waiting in vain for their return, on the manhole cover where they left him.

“An example of animal loyalty and human baseness,” says the man who photographed him.

Fortunately, the locals have fallen in love with this cat and do not miss an opportunity to pet and feed it. Some have tried to adopt him, taking him into their home, but he does not want to listen to reason: he does not move and continues to wait for the despicable people who have abandoned him, with a loyalty that only animals can have.