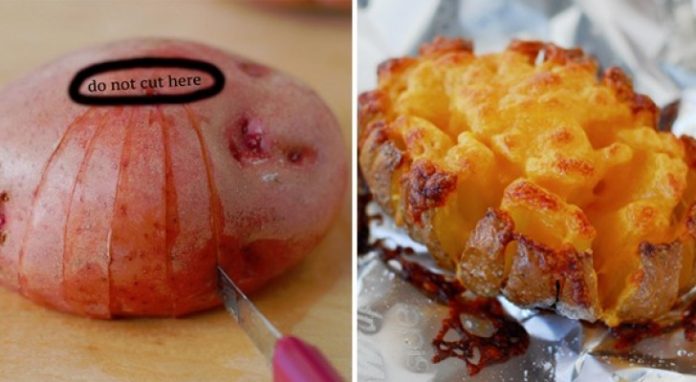 potato fillet should never be missing at home: besides the fact that you can keep it for a long time, there are endless ways to cook it. Baked or browned, they are very good but to reach the heights of taste, just add crispy bacon, cheese , or use it as a base for a savory pie instead of puff pastry .

But today, no need to go shopping, you certainly have everything you need at home!

You know what is the secret of its appearance so appetizing? Just the way it’s cut!

To start, cut a thin slice of the potato, in order to obtain a flat surface.

Then, using a thin-bladed knife, draw rings, gradually moving towards the center.

Turn the potato over and cut all around it. Make sure you don’t cut in the middle.

Once the cuts have been made, go back again and make sure they are deep enough.

Season the potatoes with a little olive oil and a little salt and put on a baking sheet.

As it cooks, the cuts made earlier will expand and the potato will open up like a flower!

After 30 minutes at 200°C, take them out of the oven and add a little more olive oil and salt. Then bake again for another 30 minutes, until crisp and golden.

But wait, the recipe is not finished! Grate some cheese and put back in the oven.

Now your imagination will be king: once the cheese is melted, you can garnish with grilled bacon, another type of cheese, vegetables, some spices… The taste will be spectacular anyway!

All you have to do is taste! 😉