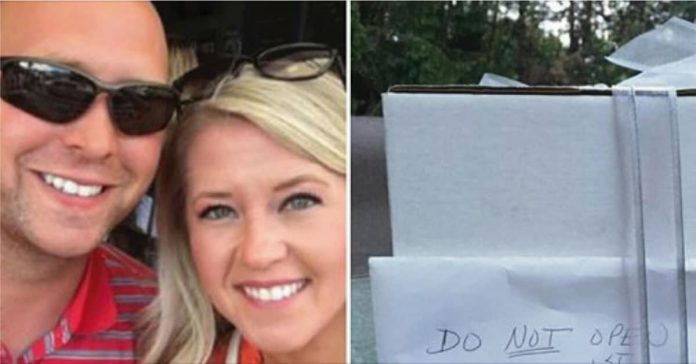 This is possibly the most unusual gift that has been given at a wedding, but it has certainly been a very original one and of great help to the couple.

Kathy and Brandon were very much in love , so they decided to unite their lives, they wanted with all their being to start a family and spend the rest of their lives together.

At the ceremony, the bride’s great-aunt, Alison, gave them a gift with a very strange label that read: “Open until the first fight” .

The couple from Michigan, United States, promised the woman to keep the promise to open it until the time indicated, although curiosity killed them.

Like all couples, Kathy and Brandon had many disagreements and arguments, yet they adamantly refused to open the package for one powerful reason.

¨In our nine years together there have been many problems, strong arguments, shouting and the desire to give up, but not even this had made us open the box. We have avoided it because that would symbolize the failure of our relationship. It’s like we don’t have enough for our marriage to work on its own ,” Kathy commented.

“Then it happened, but before opening it we questioned if it was the worst fight we had ever had and if another one happened later, how would we do it if we no longer had that box?”

On one occasion, while enjoying a glass of wine, the couple started talking about an upcoming wedding they had been invited to, which would be where they had met.

They began to discuss the possible gift they could give the couple, then they remembered that ironically the gift that had most caught their attention was still unopened and hidden in the closet.

The aunt’s present was closed for nine years, had moved through three moves and survived several arguments, they always wondered if they would need it more another time.

However, although they had been saving it for that discussion that was irreconcilable, over the heat of the drinks they decided it was time to open it.

In the box were two notes, one addressed to Kathy and one to Brandon, as well as a little cash for each.

“Go get pizza, shrimp, or something you both like ,” is what Kathy’s note said, “Go get flowers and a bottle of wine ,” Brandon’s said.

But that was not all that the box contained, there was also a crystal vase, two wine glasses, soap and bath salts, everything necessary for both of them to overcome any argument or problem

And although the gift was precious and very well thought out, it was a message that ended up stealing the couple’s heart.

“Ever since Auntie gave us this box, we thought it was the key to save our marriage, valuable advice, unknown to newbies like us. At the end of the day my great aunt and her husband had been married for 50 years, so we thought the box could save us when needed and yes, it did ,” concluded Kathy.

The couple needed patience, understanding and commitment not to open the box in the first argument, they made the decision to work things out on their own. In the end, the box was not opened to save themselves from an argument, but when they were well and even so, their marriage was strengthened.

Without a doubt, a great gift and quite ingenious, don’t you think?