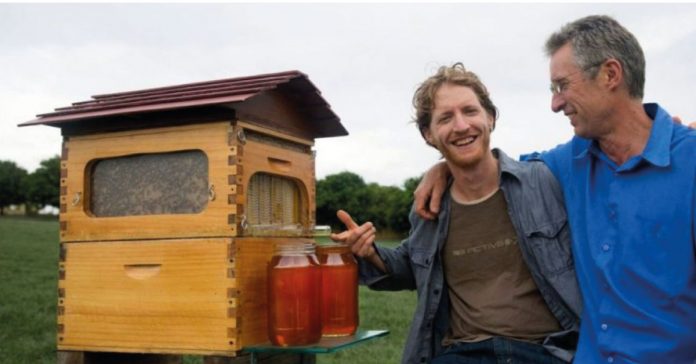 Their work has contributed to the survival of thousands of honey bees.

Our planet is in perfect balance and all species are equally important, except perhaps bees. Scientists are sure that if bees go extinct, all life on Earth will go extinct as we need these important little animals for pollination. And although there are other species of insects, birds and even bats, which are in charge of carrying pollen from one flower to another, the undisputed queens of this work are undoubtedly the bees.

That’s why Stuart and Cedar wanted to do something about it and created a curious house for bees. His invention revolutionized the beekeeping industry as well as the ephemeral life of bees.

The Apis mellifera is a species of bee that is distributed throughout the world and also produces honey. These yellow and black striped insects are unstoppable and do a lot of work. A single bee can travel hundreds of kilometers in a single day and visit up to a thousand flowers to collect pollen. And although it can only produce 1/12 tablespoon of honey throughout its life, between 30,000 and 60,000 bees live in the hive that work hard to give us kilos of honey.

However, the process of collecting this delicious amber is often complicated and dangerous for both humans and bees. Cedar and Stuart Anderson, a father and son duo, thought beekeeping hadn’t changed in 150 years, so they began looking for a way to make the honey-gathering process easier for both species.

This is how Flow Hive was born, a hive that generates a positive impact on our planet.

The Andersons thought of a way to make it easier to collect honey from the comb that also avoids putting undue stress on the insects. But their vision goes much further, since they are not only dedicated to selling beehives to people who want to start in the honey business, but also seek to raise awareness about the importance of bees.

Flow hives allow honey to be obtained with the ease of opening a tap and without the bee being disturbed in the process. On the outside it looks like a decorative wooden house, but inside the beehive magic happens. The invention consists of honeycombs connected to tubes that let honey flow directly from the hive into a jar.

The hexagonal cells of the comb are not completely closed, so the bees cover each cell with wax, completing the hexagon. They then begin to deposit the honey and when the comb is full the honey is ready to be collected. A special key is inserted that causes the cells to move, allowing the honey to start flowing and falling. While the process occurs, the insects remain safe and stress-free. Once the collection is complete, the key is turned again so that the cells return to their original shape and the process can start again.

This revolutionary mechanism has already reached more than 150 countries around the world and with more than 100,000 hives distributed . In addition, the company offers courses for beginner beekeepers in which they not only teach how to use the hive but also about other areas that affect pollinators, such as the use of insecticides.

Flow also cares about the other pollinators.

Honey bees are not the only ones doing pollination, other insects such as butterflies and bumblebees also contribute greatly. However, various factors such as pesticides, deforestation and urban expansion have caused their populations to decline.

For this reason, Cedar and Stuart also created other houses so that solitary insects have a refuge where they can have and care for their young. They are made with recycled materials as one of the company’s objectives is also to reduce its carbon footprint.

In addition, part of the profits from its flagship product Flow Pollinator House have been donated to international associations that work to protect pollinating animals. In general, these are ecosystem conservation projects around the world.

Honey bees and other pollinators are of enormous importance to our planet and it is everyone’s duty to protect them and provide spaces for their populations to continue to grow.