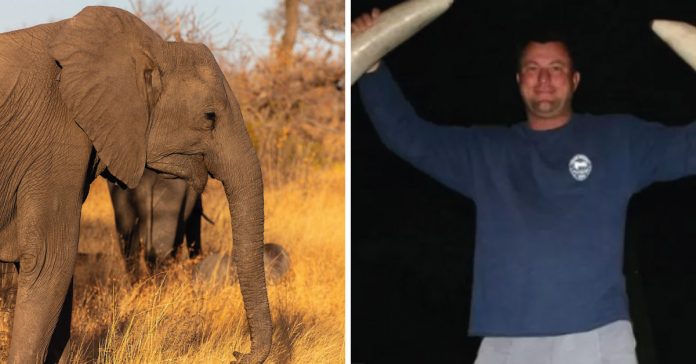 Humanity has had a great impact within nature, both positive and negative. Wildlife has been affected by the actions of people within their habitats, from encroaching on ecosystems to poaching.

These constant raids stress the species and now it is not surprising that they react violently and decide to defend themselves against the invaders.

Elephant hunting is reaching unprecedented levels due to the high demand for the precious ivory in elephant tusks. Many people start hunting recreationally, however within the black market this practice can generate great profits.

Since 2002, at least 200,000 elephants have been hunted and slaughtered in the forests of Central Africa. This is not counting the numbers from previous years where it is very difficult to find official records.

Although it has been almost impossible to stop these activities, many organizations have tried to do what they can to prevent more lives from being lost.

This time a handful of men dug their own grave with their actions.

A group of hunters were reportedly on the outskirts of a Zimbabwean village of Gwai when they suddenly came across a herd of elephants. Given this, the men felt threatened, so they decided to shoot against the herd.

Thenius Botha, one of the hunters who was in the group, fired twice. At that moment one of the elephants came towards him and lifted him into the air with his trunk. Seeing the scene, one of his companions tried to save him by shooting the animal. His actions only caused the elephant to die and collapse onto Botha, crushing him to death.

We must not forget that large-scale hunting is highly controversial for several reasons. One of them is the ecological benefits of well-managed hunting. However, that does not compensate for the impact and destruction it can cause on ecosystems.

Botha was originally from South Africa and was a well-known hunter in the region. He often traveled to the United States to encourage the population to practice the sport. He was one of the most experienced hunters in the country and his company’s website promoted him as the man who perfected the technique of hunting leopards and lions using dogs.

This is not the first hunting-related death so far this year. Recently one of Botha’s friends, Scott van Zyl, was eaten alive by crocodiles on the banks of the Limpopo River while on a hunting trip.