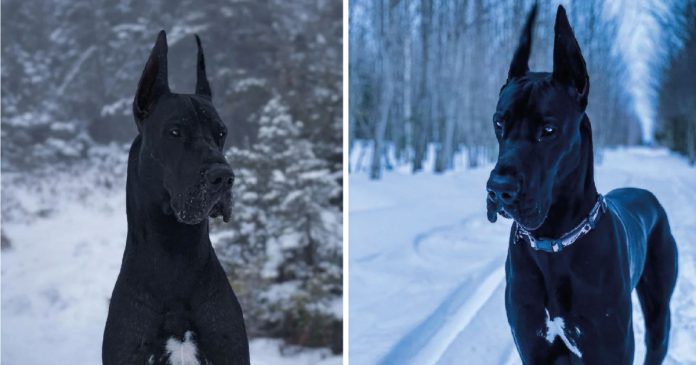 All dogs are wonderful and charming, however, each one has its own personality and physique that sets them apart from the rest. As is the case with Enzo, a Great Dane breed dog who lives in Quebec, Canada, and has become popular on social networks for his incredible resemblance to Batman .

Although physically he looks like a brave dog, Enzo has a calm and loving personality , and he loves to be petted. “He knows how to be brave, he likes to impose himself, bark very loudly and watch the house,” said Danny Lemay, the lucky owner. Due to his towering pointed ears and his unparalleled poses, Enzo looks very much like Batman .

This Canadian dog has caught the attention of every person who sees him, for his square snout, long ears and terrifying jaw that perfectly represent the mask of Batman: The Dark Knight. Danny claims that every time he goes for a walk with his dog, people stop them and ask to hug his pet and take pictures of it .

Due to his celebrity appearance, Enzo has surprised many people until he became popular on social networks. So please join us and share his story so many more people can get to know the amazing Enzo.