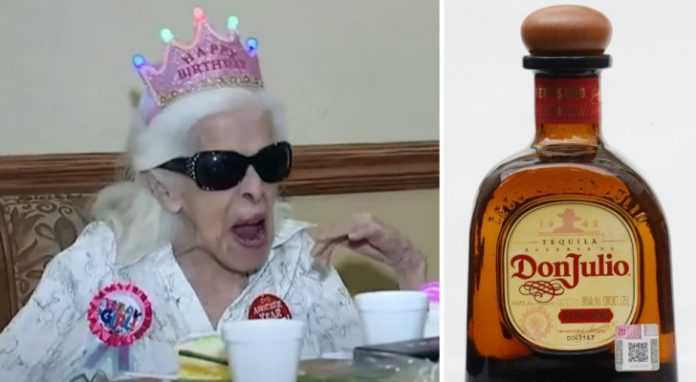 Who among us would not like to reach and perhaps exceed the 100-year mark? Living a century or more is an ambition shared by many, provided they keep their strength, but not everyone can achieve it: but what is the real secret of such a long life? Is there really one? Maybe not, but the grandmother from Arizona who celebrated her 101st birthday surrounded by her loved ones unequivocally revealed what hers is: tequila. An unusual way to ensure a long life, yet, according to the woman, her “special ingredient” is all about that!

Mary Flip lives in Chandler, Arizona, and turned 101. The elderly lady has a long “career” behind her, she has faced and overcome several difficult periods, but she has also known many joys, such as the birth of her six children. When asked what the secret to her long life is, Mary has no doubts: she replies that, at least in her case, drinking tequila is the reason for her long life .

A woman with a great sense of humor and irony, Flip moved to Mexico at the age of 18, where she discovered her passion for the local liquor and took up farming. A little later, she met the man she would later marry, with whom she returned to Chicago during her first pregnancy. In the new city, Mary began a career as an artist, which was also appreciated by the Chicago School of Art: “I really like to draw and I was able to realize that things change even when you draw them. So I was able to develop them and make them look real. It took some time but I had nothing to do but raise a bunch of kids.”

However, the woman does not exclusively appreciate tequila, but also indulges in a few glasses of beer. In honor of her 100th birthday, she decided to celebrate it with a Guinness, surrounded by family and friends.

Marie isn’t the only one to say it’s the secret to a long life: Lucile Randon, a 118-year-old French nun, said that a glass of wine a day, which she drinks daily with breakfast, breakfast, helps him conserve his energy and fend off age-related problems. Consumed sparingly, can these drinks really prolong life? What do you think ?