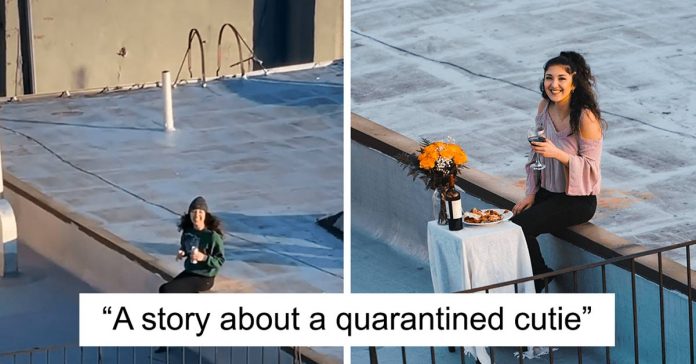 There’s no place to shop for our life partners. But, we find them in the oddest of places and circumstances. People have met the love of their lives everywhere such as churches, bars, house parties, and more recently on dating apps. This is a quite different story which all of the circumstances behind it comes together beautifully and puts a smile on our faces. The saying that love can be found anywhere and at any place, even where we aren’t looking has proved by this beautiful couple.

Many countries are on total lockdown mode with the novel COVID-19 has. Tori Cignarella and Jeremy Cohen both sat at home in adherence to the directives in places as responsible adults.

28-year-old Tori Cignarella was bored out of her mind. She headed to the roof of her Bushwick apartment building, and started dancing to the High School Musical song ‘We’re All In This Together.’

A freelance photographer, Jeremy Cohen shoots for musical festivals. Cohen decided to start on a photography project of photographing people hanging atop their buildings to keep himself busy as he was also too bored.

He said “I’ve been working on a photo series where I document people on their roofs because, during this time, a lot of people are going up to their roofs way more frequently than they have before.”

Love in a time of Corona

He saw a woman dancing on the roof and caught his attention. He found himself attracted to her after seeing her. Cohen said that he was attracted to her energy and made the first move by saying ‘hi.’

Cignarella replied too. Then Cohen flew a drone from his balcony with his phone number on it. He received a text message from his mystery woman, Tori Cignarella shortly after sending over the drone.

Cignarella got Cohen’s number after taking the device down while the drone flew a little too far initially. Then she texted back to make sure whether he flew the drone safely home.

After a few text messages, all were set for their first virtual date. A table was set for Tori at her rooftop with the help of Cignarella’s roommate and Cohen was setting one for himself on his roof as well. Despite the physical limitations, they set up a video call and chatted away while eating.

Cohen said, “The date was going so well, and depending on how long this quarantine lasts, I might be in a long-distance relationship with someone who lives across the street from me. I excused myself to the bathroom. Of course, I didn’t have to go, I just wanted to tell my group chat how well this was going.”

The video has garnered a staggering 36 million views across all social media platforms unsurprisingly.

One date at a time

Jeremy knew that he had to see Tori after the first day went on so well. But they needed to do that while practicing social distancing. Jermey thought of going to be in an inflatable bubble while Tori was going to wear gloves. But he kept it a secret from Tori.

Tori was surprised and was all smiles as soon as she saw Jeremy in the inflated bubble. They both took a walk down the streets of Brooklyn, while talking to each other. Cohen added about their bubble date that, “just because we have to socially distance doesn’t mean we have to be socially distant.”

“I don’t think I would have been capable of doing any of this without my mom.”

Cohen thanked his mum for teaching him and enabling him to maintain an optimistic outlook on life, regardless of whatever situation he is confronted with.

Tori and Jeremy are both optimistic about a future together and think they are mutually cool.  They have decided that they will remain, friends, if their relationship doesn’t work out.

Tori said, “Whether anything romantic pursues out of this or not, at the very least, I’ve gained a friend. Especially because he lives just across the street: I’m really excited to have a nearby friend I can hang out with, once this quarantine is hopefully lifted, very soon.”